As lovers of everything Batman, one thing that always makes us fall just that little bit extra in love with the caped crusader is his impressive arsenal of gadgets!

Whether he’s getting himself out of trouble or taking down the latest villains, Batman always surprises us with his latest top-of-the-range cutting edge gadget that are the perfect tools for the job of protecting Gotham City.
As a bit of fun and to help remind ourselves and you guys of the impressive collection, we thought we would rustle up a little shortlist of some of our personal favourites that we would love to own for every day (maybe not everyday then) life. Take a look….

Originally debuted on the silver screen in 1989’s Batman, the grapple gun has certainly taken Batman out of some sticky situations as well as keeping him on the tails of those pesky baddies. Essentially a spring loaded hook attached to some special ultra thin, ultra strong wire to keep everything nice and compact, it can be launched anywhere and will pull you up and away out of danger.

Why do we want this? Well, imagine this…walking down the street and spot someone you’d rather not speak to…fire and away you go until the coast it clear. Social bliss! Plus it beast walking up flights of stairs huh.

Perhaps one of his lesser known gadgets and only really seen in the comic series, essentially heel propellers are just that….special propellers built into his boots. Could you really imagine batman floundering around in the water with a full suit on? Na!

Why do we want this? Two reasons mainly…swimming is hard, tiring and well for us at least, slow. Secondly, FUN! How much fun would it be to effortlessly whizz around in the water with some of these?? Enough said. 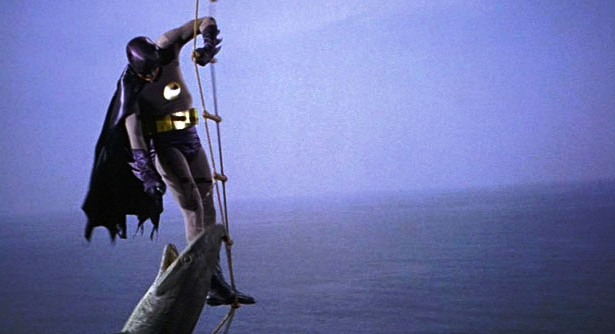 Fans of the classic Batman films will know this one! Who could forget that classic tension building sequence from BATMAN: THE MOVIE, in which Adam West has a ‘slightly less than real’  shark attached to his leg and punching it just won’t do, so Robin must leave the helicopter on auto-pilot and scale the ladder to pass him (upside down) his shark repellent bat spray. Impressive stuff! If you haven’t yet seen this clip, a little YouTube search is a MUST!

Why do we want this? To be perfectly honest, we doubt it would come in much use in our typical day, but who knows where our heel propellers could take us! Mostly it would be bragging rights for down the local really.

Possibly one of the coolest cars ever to hit the silver screens, the legendary Batmobile is one of the most ultimate cars. It can go everywhere, do everything and is about as subtle as a sucker-punch to a lions face…if you get the message. While there have been a few versions of this ultimate gadget, the latest edition is about as functional as they come and would be our pick of the pack.

Why do we want this? Easy one! Wherever you want to go, whatever the situation, this thing will take it on with east. No one will dream of cutting you up on your daily commute will they? Probably gets good MPG too…. okay maybe not.

First seen in Batman Begins, when Batman charges his cape with an electric current, the material becomes rigid and takes on a shape mimicking bat wings. He can then use his cape like a glider and, next to his grappling hook, it’s the closest he comes to actually flying. Not only does this thing look cool, but it means you can fly….or maybe just fall with a lot more style perhaps.

Why do we want this? Ever find yourself stuck at the top of a building with no way of getting off? Nor us BUT if you ever did this would be the perfect thing. Would also make any fancy dress party and easy choice at least.

That’s all folks, what gadgets would you most like to own? Let us know with a comment below.

Our Top Batman Gadgets We’d Love to Own

by Iain time to read: 3 min
Celebrity Top Geeks of the 80s!
Brands What do Chunk Clothing eat for Breakfast?
0