With the amazing new Superman film Man of Steel coming our way in the not to distant future (well…Friday 14th June to be exact), we thought it would be the perfect time to dig up some cool, interesting and perhaps shocking Superman facts to tickle your superhero taste buds in preparation for the action packed feature film.

Some of these you may already know, some you might not (we didn’t!), but sit back and breath it all in 🙂

1) Superman was originally created by Jerry Siegel and Joe Schuster waaaay back in 1932 but was rejected many times by many different publishers. When Jerry and Joe originally created Superman he also wasn’t the bright blue and red caped superhero we all love today which may have been a reason.

2) Superman wasn’t actually born ‘Super’. That’s right! All people on his home planet Krypton are essentially powerless as the planet has a red Sun, it’s not until Superman lands on Earth which Sun is yellow which means a Kryptonian’s cells can absorb and convert these new solar rays into incredible power. As young Clark Kent grew older, he grew more powerful as his body was able to store more solar energy and convert it more effectively making him super!

3) The S in the Superman shield logo doesn’t actually stand for Superman. Wowowowhaaat?! The explanation for Superman’s symbol has changed a few times. For decades, the comics simply said it was nothing more than a stylized monogram designed by Clark and his adopted parents, something they whipped up together after deciding on his new alias. HOWEVER….Superman: Birthright, writer Mark Waid revealed that the symbol was not a family crest, as the films had first indicated, but was an ancient Kryptonian symbol that meant “hope.” The name Superman came after the symbol was created. 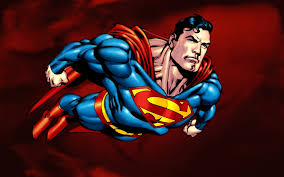 4) He hasn’t always been able to fly. When Superman first appeared in 1938, the comic said that he was incredibly strong, could withstand anything less than a bursting shell from a tank, and was able to leap 1/8th of a mile. And that was it! His ability to fly first showed up in the radio series and his original cartoons. In the comics, he officially gained the ability to fly in 1941, nearly two years after his first story.

5) Superman was originally a villain. Who was the original bald evil genius bent on world domination?? If you said Lex Luthor then you are horribly, horribly mistaken. It was in fact the earliest draft of Superman. Unfortunately this proved to be incredibly unpopular and so a complete rewrite of the character was done for his more iconic ‘first appearance’ in action comics.

6) Kryptonite isn’t his only weakness. Superman has faced many alien and superhuman enemies whose strength rival his own and whom have been able to injure him through sheer force. Also since he draws his power from a yellow sun, the radiation of a red sun (such as the one Krypton orbited) immediately robs Superman of his power making him…not so super.

7) Clark was named after Hollywood stars. Superman co-creator Jerry Siegel came up with the name of Superman’s alter ego by combining Clark, as in Clark Gable, with Kent, as in Kent Taylor, an actor who was also Siegel’s brother-in-law.

9) He doesn’t actually need to eat or drink. Superman’s body is like a plant (bare with us), his body processes sunlight and he doesn’t need anything else to survive. The only reason he eats and drinks is to feel more human and connected to humanity. How sweet.

10) Superman’s birth name “Kal-El” resembles words in Hebrew meaning “Vessel of God”. The suffix “el” meaning “God” is found in the names of a few angels such as Gabriel and Ariel.

And that’s a wrap! If all this superhero talk has got you craving some more Superman in your life, don’t forget to check out our eber-growing range of official Superman T-Shirts from only £9.99!