With only a month or so to go until the 2011 MTV Movie Awards – the nominee list has just been revealed and we’re pleased to see a superhero-worthy number of nominations for films, actors and notable moments from this years most successful page-to-screen adaptations.

In the Best Breakout Star category, it’s Spider-Man vs. Hit-Girl as “The Social Network” actor Andrew Garfield vies against Chloe Moretz, the ass-kicking, pre-teen dynamo of “Kick-Ass.” Also nominated is Jay Chou, who also kicked a significant amount of ass as Kato in “The Green Hornet.”

The Best Villain category features the comics-friendly duo of Christoph Waltz in “The Green Hornet” and Mickey Rourke in “Iron Man 2.” We’re not sure why none of the Evil Exes from “Scott Pilgrim Vs. The World” made the cut here, but hey, we don’t make the rules.

It feels like another “Scott Pilgrim” snub here, but the only comic book movie to get a nod in the Best Fight category was “Kick-Ass” — specifically, the very-worthy brawl between Chloë Moretz and Mark Strong.

We’re starting to see a pattern here, as “Kick-Ass” and “Iron Man 2” once again get the only nods in the Biggest Badass Star category. This time, it’s Chloë Moretz in “Kick-Ass” squaring off against Robert Downey Jr. in “Iron Man 2.” The good news in this category? There aren’t any nominees from the “Twilight” movies! We’ve got a chance, comic book movie fans!

Want to find out more? Check out the full article here and let us know who you’re tipping to win!

Style queen and TruffleShuffle aficionado Mollie King from The Saturdays was featured in New! Magazine this week, sporting our amazing Women’s Inspector Gadget T Shirt. A-List style for just £20, get yours here.

To celebrate the best in online fashion Handbag.com have just launched their annual Online Fashion Awards for 2011 and we would love your votes and hopefully you would love to vote for us!

It will only take two minutes of your time to nominate TruffleShuffle.com as your favourite online retailer. We know how much you love us, you are always telling us how great we are – well, here is your chance to share the love and let the rest of the world know it!

Nominations will close at midnight 25th March. The 50 entries with the most votes will be passed onto the judging panel, who will be drawing up a shortlist in April. You can vote as many times as you like, nudge nudge, wink wink 😉

Come on Shufflers, you know what to do…… xoxo

While getting our fix of the mags last night, TruffleShuffle came across this amazing story of how a Space Hopper saved the lives of two young girls and we had to share it with you.

The two girls aged 15 and 16 were walking along a sea wall in Dawlish when a freak wave knocked them off and swept them out to sea. Neighbours heard the girls screams and ran to help but when they realised the life bouy wouldn’t reach them, they had to come up with another plan of action. Luckily, another quick thinking neighbour just happened to have a Space Hopper to hand?!! which he was able to throw out to where the girls were trying to stay afloat. With the help of the super space hopper, the girls were able to hold on till the life boat and coast guard rescue teams arrived.

Both girls went on to make a full recovery after their ordeal and will always remember the funny faced, bouncy toy that saved their lives. Get your very own super life saver for just £14.95 at TruffleShuffle.com. We know what we are taking with us to the seaside this Summer!

The cast of the upcoming season of Dancing With The Stars has finally been announced and it reads like an 80’s who’s who which has understandably got us very excited!
Even though the show is based in the states, it’s broadcast over here which means we too get to see the likes of
David Hasselhoff, Michael Bolton, Florence Henderson and most excitingly, Jennifer Grey AKA Dirty Dancing’s Baby (eeek!) strut their stuff on the dancfloor! Jennifer has been MIA for what feels like years since her roles in Dirty Dancing and Ferris Bullers Day Off so we’re very excited to see her back in the spotlight – you couldn’t ask for a more appropriate 80’s legend to show us their moves! 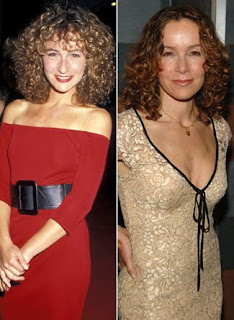