This week TruffleShuffle.com make an appearance in Bliss Magazine, not once, but twice, with our Pink Mickey Mouse Canvas Tote Bag and Mermaid Charm Wrap Bracelet! Like we’re not just a pretty face, we do have lots more to offer than our wonderful t-shirts, so make sure you check out all our funky accessories and gifts here and pick something up now to complete your outfit!

Star Wars and Call of Duty fans will love this unofficial mod which turns your PC copy of Modern Warfare into an epic game of galactic battling. In development since 2009, it’s called Star Wars Mod: Galactic Warfare, and is the product of a team of German coders called BlackMonkeys. Check out the video trailer below for a sneaky peek of what to expect….

As The Guardian reports, It’s a total conversion so all the environments, weapons and characters have been re-skinned to fit within the Star Wars universe. Players can choose to become troopers in the Imperial Forces or soldiers of the Rebel Alliance, before scrapping it out over seven maps including Mos Eisley, Bespin and Jundland. Of course, as it’s a mod, you’ll need the PC version of CoD: Modern Warfare, but if you already own the game, you have little excuse not to download, install and start deathmatching on the deadly sands of Tatooine. We  just hope the legal depts at LucasFilm and Activision will turn a blind eye!

Anyone had a play yet?

Just doing some research in preparation for a new range of Ferris Bueller T-Shirts we’re developing and came across this little gem which we had to share with you…….

It’s only a flipping Ferris inspired board game!

With play inspired by a tonne of classic Ferris-ism’s including ‘you get a table at Chez Quis as Abe Froman’ and ‘Ferris and Cameron take the 1961 Ferrari 250 GT California’ – this fab find definitely beats Snakes and Ladders! 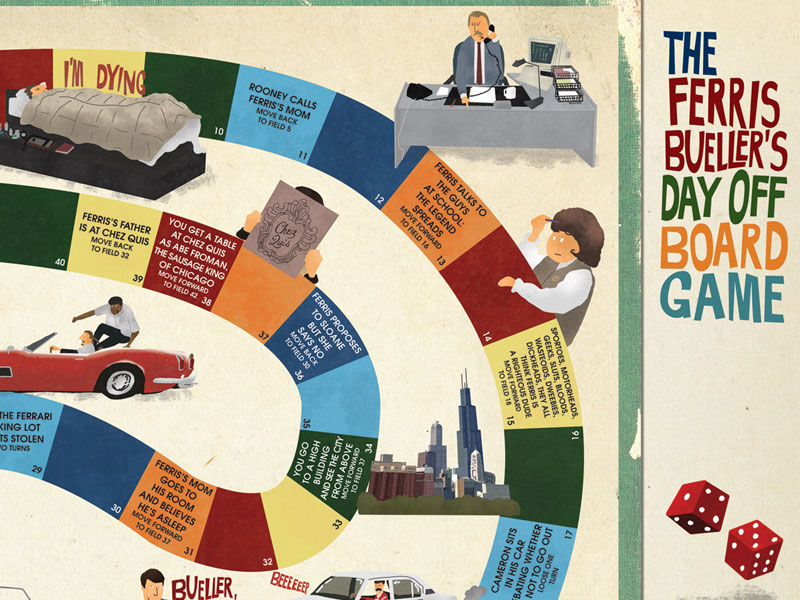 Created by artist Max Dalton to be included in the Gallery 1988 show, The Road to Shermer: A Tribute to John Hughes which took place back in February this year, why not download the imagery here – print it off and have a go yourselves? You too can just be like our hero Ferris Buller but without having to leave the comfort of your own home! Genius!

Oh and while we’re on the subject – a huge happy birthday to the classic 80’s movie which – would you believe it – turns 25 this year! Check out Popeater for a fab celebratory  interview with Edie McClurg – who played the hit film’s hilarious school secretary Grace – about working with Matthew Broderick, Jeffrey Jones and the late John Hughes. Turns out, she’s a righteous dude!

I have come to the conclusion that I was born with a genetic obsession for everything Batman. If I thought I could get away with living in a cave and running round dressed as a giant bat I think I would.

The obsession all started with me running around as a little lad with a coat hanging off the back of my head, singing nana nana nana nana nana nana nana nana Batman which back then, was enough to convince me that I too could be a superhero. I blame it on Adam West’s 60’s Batman spoof T.V series which first introduced me to the adventures of the caped crusader! For those of you who don’t remember or need a reminder, check out this hilarious vid I found!

I don’t remember Batman having such sweet dance moves…… Hypnotic and equally creepy at the same time – he shakes a pretty mean cape I think you’ll agree!

I have to say though that back then, little old me thought Mr West was quite the bada$$ and I was well jealous of all the gadgets and anti- bat this, bat-that even bat thermal underwear and the most awesome Bat-Mobile that ever was, even by today’s standards.

My love for Batman continued throughout my childhood – through all his various incarnations. There have been several Batman’s….um Batmen since Micheael Keaton who stared in Tim Burton’s gothic vision of the Batman! Val Kilmer and even George Cooney also got involved which I actually forgot about (not that I could ever forget Alicia Silverstone as Batgirl – insert pervy groan noise here.) In my humble opinion though, there’s no truer representative to Bob Kane’s original vision of the Dark Knight than Christian Bale who comes the closest to portraying what Batman should be – dark, moody, a loner and a little bit mental. Having seen his parents murdered in front of him and living a life a seclusion, dedicating every waking hour to mastering martial arts and all the while planning vengeance would leave any man a little twisted, even if he is a billionaire. Part justice seeking detective and part nightmare of the underworld – if anything Batman is as screwed up as any of the villains he fights against.

I was also a big fan of the comic series and in my early teens I tried to read every Batman comic I could get my grubby nerdy little mitts on. At the time, a story called Knight fall was the big thing, starring  a super villain called Bane who hatched a plan to break out every insane villain of Arkham Asylum, home of the criminally insane leaving our hero Batman to round up these nut jobs including the Joker and many others until he reached near exhaustion. Anyone else remember it?

Stretched to his mortal limits and being awake nearly 24/7 – Batman finally came face to face with the steroid (well “venom”) induced criminal mastermind Bane and in one epic battle, Bane gained the upper hand and delivered a devastating backbreaker, crippling Batman and leaving him paralyzed. Needless to say it was sad day and the first time ever Batman had actually been beaten – I liked it because  it forced you to stop thinking of Batman as a super hero and realize that at the end of the day, he’s just a man.

So what next for the insanely popular Batman franchise? Well – it’s a fair old while away but The Dark Knight Rises is coming to the big screen and is due for release on July 20th next year. Fair to say – I’m pretty excited! Christian Bale  will reprise his dual role as Batman/Bruce Wayne and he will be re-joined by Michael Caine as Alfred, Gary Oldman as Commissioner Gordon and Morgan Freeman as Lucius Fox. Personally, I can’t wait to see how Christopher Nolan will portray Bane – played by Tom Hardy. Hopefully he’ll do the bad ass super megalomaniac justice! Plus there’s the added bonus of Selina Kyle aka Catwoman – played by Anne Hathaway. Looking forward to seeing how she’ll compare to Batman Returns Michelle Pfeiffer and the completely forgettable Halle Berry.

If all that take has wet your appetite as much as it has mine, check out the trailer below….

So what do we think? To be honest, I’m not sure what to expect and I don’t want to hype it up too much in my head being that it’s a while off yet. So in the meantime, I’m going home to my Bat cave to read knight fall whilst  wearing my Batman t-shirts and drinking from my Batman mugs. I’m even going to put on my Bat Underpants and Bat socks and talk in a husky voice like Batman! I’m going to hide behind people in the shadows and when they turn around I would have already gone. I might even wear a cape! See – told you I was Batman!