If the mere mention of goblins, Jareth, the bog of eternal stench and that uber scary maze gets you brimming with excitement, you will be mightily impressed with our brand new Labyrinth TShirts, fresh on the site today!

With some wicked designs for both the men and ladies there is bound to be something to tempt you!

Every so often we hear a tune that brings memories flooding back……. Well Sesame’s Treet by Smart E’s did exactly that in the office today. We love Sesame Street and we love this tune!! Enjoy….. 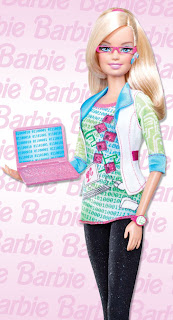 Barbie, ‘the’ iconic fashion doll of nearly every little girl since 1959 has a new career — as a computer engineer!
For the first time, Mattel took an online vote, asking people to select the Barbie doll’s 125th career by choosing between architect, computer engineer, environmentalist, news anchor or surgeon.
“As a computer engineer, Barbie will show girls that women can turn their ideas into realities that have a direct and positive impact on people’s everyday lives in this exciting and rewarding career,” she said. Mattel polled fans on Facebook and Twitter for Barbie’s next big career change.
However, while the popular vote went to computer engineer, Mattel noted that girls selected news anchor as their favored career for the doll that, over the years, has been an aerobics instructor, nurse, flight attendant, NASCAR driver and an ambassador.
The girls’ choice wasn’t disregarded. News Anchor Barbie will be the doll’s next career.
The toy company, which unveiled both new career-minded dolls at the 2010 American International Toy Fair last weekend, noted that they are both expected to hit store shelves very soon.
Computer Engineer Barbie is going geek chic with a binary code patterned T-shirt. She’s also decked out with a pink laptop, a smartphone, a Bluetooth headset, and trendy eye wear.
To add to the idea of being a computer engineer, the doll comes with a code that unlocks exclusive online game content on Barbie.com.
And for all you nerds out there that are wondering what the binary code on the laptop screen says. It says “Barbie Barbie Barbie” in ASCI.
A t-shirt related stop motion animation thats what! Enjoy.
Well done to Rhett & Link, truly amazing.

Justin Lee Collins: How showbiz are you?

As he prepares to launch his show Heads or Tails, we sat down with Justin Lee Collins to find out exactly where on the celebometre he resides….1. Who’s the most famous name in your mobile? It would probably be Jamie Oliver or Mark Ronson. But my favourite name in my mobile would be the musician Richard Hawley. He’s a brilliant songwriter and although I wouldn’t say we’re friends, I would dearly love to. We did a Radio 4 programme a month or so ago and he was on it and we bonded over a pint of Guinness or two and swapped numbers. So maybe this is the beginning of a beautiful friendship.Name dropped AND took the opp to plug a new artist/mate. 5/52. What’s the most bizarre thing you’ve ever read about yourself?Goodness me, have I read anything that’s particularly bizarre? I don’t recall reading anything in print about myself that I thought was necessarily made up, so if it was bizarre it probably came from me.Obviously doesn’t read his own press. 0/53. How much is too much for a haircut?My hair is very important to me so I would pay quite a lot to keep it in the tip top shape that we all know it’s in. £200-£300 maybe too much, but then I’d probably still pay that. I go to a salon in Bristol called Maximum FX and Sean my hairdresser is the only man I allow to touch my hair. I’ve been going to Sean since I was about 11. Well other people can touch it but they are not allowed to cut it or try and shape it in anyway, he’s the only one who has this privilege. Sean is the best so there is no amount of money I wouldn’t pay because he’s worth absolutely every penny, he’s kind of like Bristol’s Nicky Clarke.Willing to pay £200-£300 to ‘Bristol’s Nicky Clarke’!!?! The actual Nicky Clarke would do it for that. 0/54. Katie Price. Friend or foe?I wouldn’t call her a friend. Katie and Peter Andre came on the Sunday Night Project and I don’t know either of them well enough to call them friends, but I would like to be able to call Peter a friend. I think he’s a really, really lovely man and I’ve seen him quite a few times since and I always like to give him a big cuddle because I think he’s a genuinely decent guy. So between the two of them I would like to say I could call Peter a friend but I wouldn’t say I was friends with Katie Price, but then also we aren’t foes, so we are neither friend nor foe, I would say I’m quite indifferent to her to be honest. Foe it is then. 3/55. What’s the weirdest thing you’ve been sent by a fan? Unfortunately I’ve not been sent anything weird by a fan. I would dearly love to be sent bras and socks – not knickers, that’s a bit grubby, send me a bra and a nice thick pair of socks. I’ve got a problem with my socks. My friends tell me my socks are too thin, can socks be too thin on a man? So if someone wants to send me some thicker socks and a bra then I’ll be happy, but up until now no one has sent me anything weird. I get very boring mail.0/56. Best party ever? The best party ever was my auntie Lizzie’s annual boxing night Christmas party. Her husband at the time had hired a video camera for that party, so there’s a betamax videocassette in the family somewhere with Christmas 1984 recorded on it. That was a great do, I was 10.Bonus point for betamax admission. 1/57. Ever used your fame to get what you want? No I never have. I’ve never phoned up asking for anything for nothing, I’ve never phoned up to reserve a table or any of that nonsense. If I want to go out for a meal and I phone up to get a table and they tell me they are fully booked then I go somewhere else. The day I do that will also be the same day that I shoot myself in the face.Isn’t that the whole point of being famous? 0/58. How much cash would it take to get you to pose in the buff? At the moment there’s no amount of money, but in the future who knows? Believe me, if you ever see a picture of me anywhere in the buff you know that times are hard for me.Didn’t do Dannii Minogue any harm. 0/59. Best freebie you ever received? I get sent a lot of t-shirts. There’s an online company based in Bristol called Truffle Shuffle who are the t-shirt kings so every now and again I get a nice little package of great t-shirts. I’m wearing one of their designs today, it’s the Slush Puppy dog, so that was a pretty good freebie, I love my t-shirts.Another shameless plug for local business! 10/510. Ever been chatted up by another celeb?I’m not sure if this qualifies as being chatted up but Mischa Barton guest hosted the Friday Night Project once and she asked me to escort her to the Berkeley Square Ball. Needless to say I didn’t really have anything to wear so I couldn’t go. It still keeps me awake at night. I don’t know if that was a chat up as such or whether she just needed someone to go with.He turned down a date with Mischa?! 10/5 Score: 29/50What can we say? It seems despite refusing to get his kit off for our entertainment, declaring the best party he’s ever attended was when he was 10 and shamelessly plugging local businesses for free, JLC is more showbiz than not (just), although he really needs to work on his ‘don’t you know who I am?’ mantra. Still, at least we know why Mischa went off the rails.
Thanks to Matthew Bagwell for the interview.