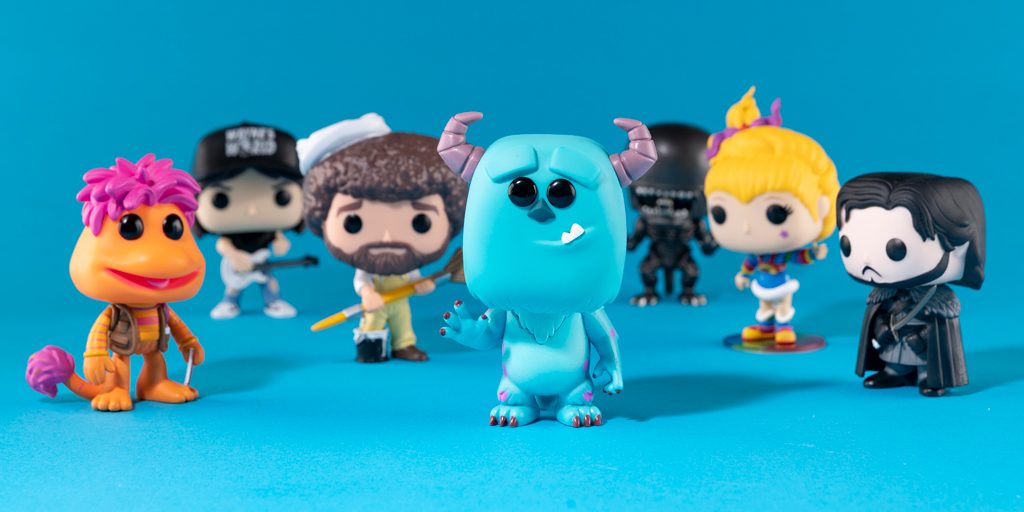 Since their first launch back in 2010, these amazing little Pop! figures have become so sought-after and come in an ever-growing range of characters and licences! If it’s cool, there’s a Funko Pop! for it!

Selecting the best of the best, we have hand-picked some of our very favourite available to create a super TruffleShuffle collection of our own which you can snap up too.
Take a look and see what we’ve managed to get our hands on… 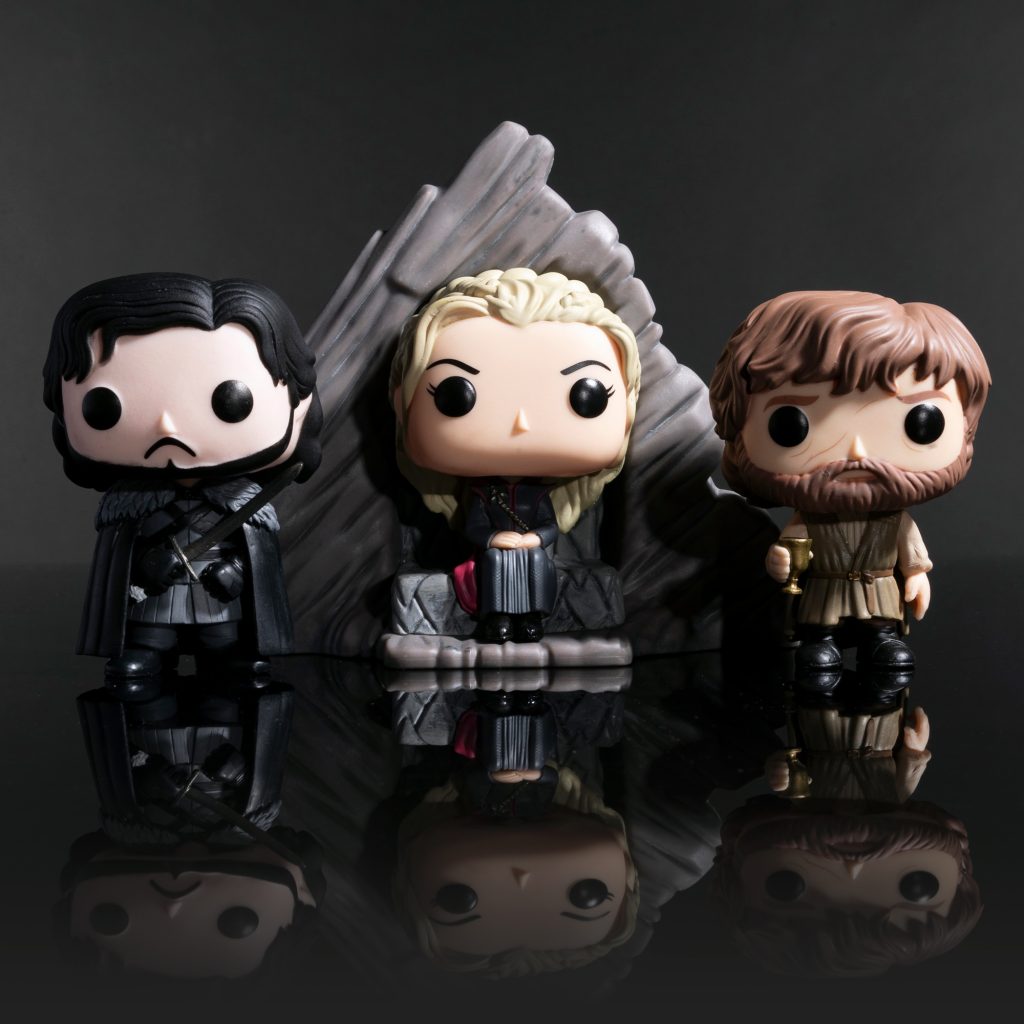 Sniffing out the best from Westeros, these ace Game of Thrones Funko Pops! might be small in size, they’re HUGE in character!

END_OF_DOCUMENT_TOKEN_TO_BE_REPLACED

Waca Waca Waca! Another retro movie weekend is before us!

Like one of the most dedicated retro gamers in the land, we find ourselves faced with some of the coolest 8-bit adventure goodness. Snacks at the ready, we’ll limber up our fingers before button bashing our way to the ‘big boss’. Fighting with everything we’ve got, we’ll lean side to side before finally throwing the controller in the air (cable keeping it firmly away from the ceiling) as we throw the winning move and they admit defeat.

.
Willy Wonka and the Chocolate Factory (1971) ITV3 11:55am-1:55pm
An eccentric confectionery king announces that five children will be given a tour of his wondrous factory. The winners turn out to be a kind-hearted boy from a penniless family and four obnoxious brats, who face a terrible fate when they misbehave. Musical fantasy, based on Roald Dahl’s classic book Charlie and the Chocolate Factory, starring Gene Wilder, Jack Albertson, Peter Ostrum and Roy Kinnear.

James and the Giant Peach (1996) 5STAR 2:50pm-4:25pm
An unhappy orphan living with his cruel aunts discovers a gigantic peach growing in the garden. Venturing inside, he meets six friendly insects and together they embark on a magical journey. Animated and live-action fantasy, based on Roald Dahl’s novel, starring Paul Terry, Joanna Lumley and Miriam Margolyes and featuring the voices of Susan Sarandon and Richard Dreyfuss.

The Fifth Element (1997) 5STAR 4:25pm-7:00pm
In the 23rd century, the world faces destruction from a seemingly unstoppable force of pure evil. Meanwhile, a New York cab driver encounters a mysterious woman destined to save the Earth from its fate, and has to protect her from a scheming arms dealer and a horde of alien mercenaries. Luc Besson’s sci-fi adventure, starring Bruce Willis, Milla Jovovich and Gary Oldman.

Independence Day (1996) E4 7:00pm-9:50pm (2 hours 50 minutes)
A fleet of huge flying saucers launches a devastating and unprovoked attack on Earth. As survivors try to flee the seemingly unstoppable alien invaders, the courageous US president, an ace pilot and a computer genius come up with a plan to take the fight to the enemy and save the human race. Roland Emmerich’s sci-fi adventure, starring Will Smith, Bill Pullman, Jeff Goldblum, Mary McDonnell, Randy Quaid, Robert Loggia and Harry Connick Jr.

Braveheart (1995) More4 9:00pm-12:35am (3 hours 35 minutes)
Account of the life of medieval Scottish hero William Wallace. After the slaughter of his father and brother, young Wallace is taken in by his uncle, who teaches him how to use not only his brawn but his brain – which he employs to great effect years later when he resolves to drive the English out of Scotland. Oscar-winning historical epic, directed by and starring Mel Gibson. With Patrick McGoohan, Sophie Marceau and Catherine McCormack.

The Warriors (1979) Film4 11:10pm-1:00am (1 hour 50 minutes)
A New York gang leader calls together all the gangs in the city, with the intention of uniting them. However, when he is assassinated, one of the groups he was hoping to draw into his alliance is framed for the murder, and finds all the others have turned on it. A battle for survival to make it back to their own turf alive ensues. Action adventure, starring Michael Beck and James Remar.

.
Buffy the Vampire Slayer (1992) Syfy 12:40pm-2:30pm (1 hour 50 minutes)
A high-school student discovers she is the latest in a long line of superhuman warriors, destined to protect the human race against vampires. As she hones her fighting skills with the aid of an occult expert, an ancient bloodsucker plans an attack on her high-school. Comedy horror that inspired the TV series, starring Kristy Swanson, Rutger Hauer and Donald Sutherland.

The Phantom (1996) Film4 2:45pm-4:40pm (1 hour 55 minutes)
A jungle-dwelling masked adventurer leaves his African home for New York in a bid to stop the power-crazed schemes of an evil industrialist. The tycoon is on the hunt for three legendary magical skulls, which can be combined to form the ultimate weapon. Superhero adventure, starring Billy Zane, Catherine Zeta-Jones, Treat Williams and Patrick McGoohan.

Beethoven’s 2nd (1993) ITV2 2:45pm-4:30pm
The slobbering St Bernard is now grown up and in love with his beautiful sweetheart Missy. Together they bring a litter of puppies into the world – but have to go on the defensive when Missy’s owner, the evil Regina, sets out to steal them for herself. Comedy sequel, starring Charles Grodin, Bonnie Hunt, Chris Penn, Nicholle Tom and Christopher Castle.

Fun Fact: Angela Douglas was actually really terrified about her singing sequence. Joan Sims had to literally push her onto the sound stage, having given her two brandies before she went on.

From Dusk Till Dawn (1996) ITV4 10:00pm-12:40am
A crook and his unhinged brother take a preacher’s family hostage and cross the border into Mexico. They head to a rough strip club to make a planned rendezvous with a third party – but they soon have to live on their wits when they realise that the establishment’s staff are vampires. Horror, starring George Clooney, Harvey Keitel, Quentin Tarantino, Juliette Lewis and Salma Hayek.

Good Will Hunting (1997) ITV3 10:05pm-12:15am
A troubled maths genius refuses to use his gift, preferring to work as a janitor and lead a normal life with his friends. Eventually, a university professor persuades him to see a psychologist, who befriends him and proves the only person able to help him come to terms with his talent and past traumas. Drama, written by and starring Matt Damon and Ben Affleck, who won Oscars for their screenplay. With Robin Williams, Minnie Driver and Stellan Skarsgard.

Whatever you’re up to this weekend, don’t forget to hit save and remember that some food can look pretty bad, but can taste amazing!

To get into the true spirit of Halloween, I have picked out my favourite spooky Halloween TShirts. For those who are not brave enough for full-on fancy dress, have no party to go to or are  just too damn cool, these beauties which encompass the themes of horror, ghosts and ghouls and vampires are sure to get your juices flowing!

We’re always adding shedloads of awesome new stuff to the site but here’s a few of our favourites from this week….

With only 25 days to go to THE BIG DAY, we’re starting to get pretty excited about the impending Royal Wedding and our new fit for a Princess, Little Miss tee is the perfect way to welcome the celebrations. With sparkly blue jewels on her golden crown, Little Miss Princess is the latest addition to the classic series of children’s stories, created by Adam Hargreaves in time for the wedding of Prince William and Kate Middleton. Our exclusive tee features a shot of her in all her royal glory making it perfect for any fellow princesses in waiting! Click the pic to find out more…

This unmistakeable Kiss tee from Amplified is definitely a stand out design from their Spring Summer collection.  Featuring a cracking shot of Kiss frontman, Gene Simmons complete of course with his trademark facepaint, we think this Lick It Up tee is a future Amplified classic. Click the pic to buy.

Oh wait, we do! This is no ordinary bit of kit though. Built completely from LEGO bricks, it can’t be taken apart but bricks can be added to the top or bottom of the camera so you can dig out your old toy box and start putting those boxes of lego back into use. Perfect for us grown ups who can still smell those little plastics bricks as if we were ten years old, kids will obviously love it too making it perfect for their first foray into the world of photography. Let’s be clear, this is no toy though; it’s a full functioning 3 Megapixel digital camera, featuring a color 1.5” LCD screen.  It takes high quality photos with the built-in flash, fixed focus and digital zoom and  holds up to 80 photos at a time. Prepare for the nods of approval when you get this out and start snapping away…..

If your man ‘has the power,’  looks great in red and is the master of your universe, our excusive My Boyfriend is A Real He-Man T-Shirt from Fame and Fortune is an essential buy. Inspired by our very own Prince of Eternia AKA He-Man, this gorgeous fitted grey tee brings memories of a legendary 80’s hero in true TruffleShuffle style.

We all know times are pretty tough right now so if worrying about the pennies is getting you down, try cheering yourself up with our exclusive tongue in cheek Monopoly Skint tee. A definite conversation starter….

And finally.. Chocoholics rejoice! The Chococase is a high-quality silicon protective casing for the iPhone that looks just like a delicious bar of chocolate. Leave it face down and it looks like tasty confectionary, but turn it over and the secret is revealed – it conceals and protects your iPhone! The perfect way to indulge your love for chocolate without the calories… mmmmmm!

That’s all for this week folks but fear not, there is a TONNE more new stuff on the site for you to check out! From Glee to Grease, Buffy The Vampire Slayer to The Sex Pistols, check it all out here… http://www.truffleshuffle.co.uk/store/advanced_search_result.php.