If there’s one thing TruffleShuffle has been known for for a long as we’ve been around, it’s our epic collection of clothing including our range of Novelty TShirts!

Whether you’re a sci-fi addict, a cartoon aficionado, movie buff or even a gaming high score legend, we’ve got the designs and style that will have you button bashing your way through the site.

Take a peep at some of our favourite novelty tees that make perfect Christmas gifts for someone special. Enjoy! 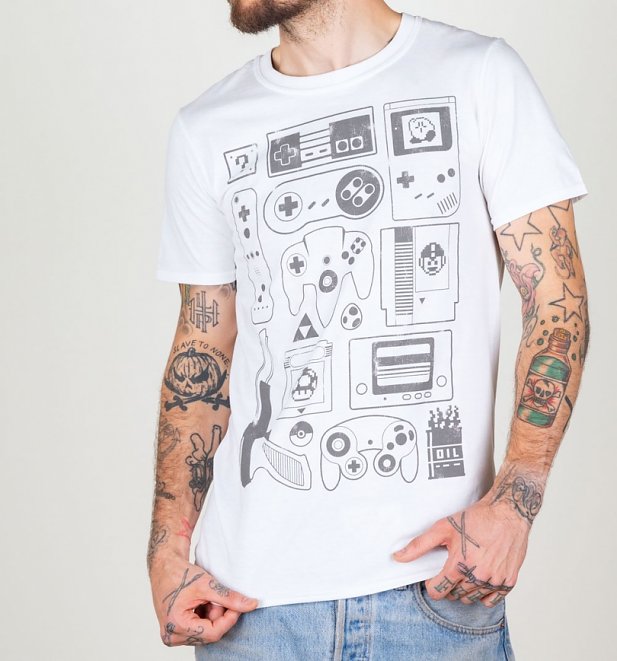 One for all you gamers out there! Show your love for some of the most iconic consoles ever with this ace Old School Gamer T-Shirt! Great way to wear your gaming heritage in style! 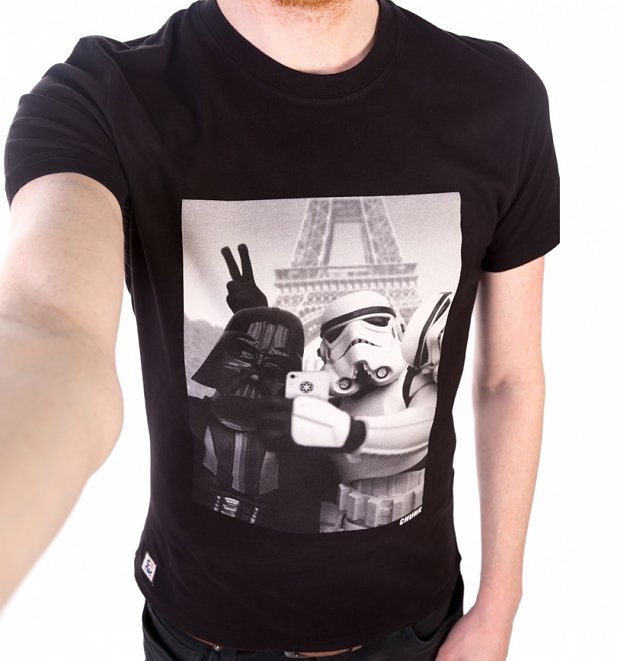 END_OF_DOCUMENT_TOKEN_TO_BE_REPLACED

Dunk the bag an pour the water! Another retro movie weekend has just hit our shores and is shaping up to be another beauty from the deep!

With our pillows plumped, our blankets… being blankety and our cups full of something hot, we’re looking as ready as ever to take on another weekend packed full of retro movie gold. Will we be in the future? Will we be taken back to the dark ages? No matter what we’re wearing, we will be able to embark on a mighty adventure from the comfort of our own sofa. Hold on tight peeps!

END_OF_DOCUMENT_TOKEN_TO_BE_REPLACED

Phew! Now all the excitement and chaos is over, we thought we would take a few minutes to sit back, grab a cuppa and reflect on the last year to see what our highlights were and what you guys we’re loving on the site.

Truly the icing on the TruffleShuffle cake in 2017 was our amazing Polly Pocket Bags! When we first released these to the wild, the world went wild as we had countless features, articles and posts about them. We could barely keep up!
Reaching far corners of the world, it seems this was just what was missing from many 90s kids collections and the demand was so far beyond what we ever expected. It didn’t take long for this little pink number to hit our top spot which is where it stayed for the rest of the year.

Labyrinth The Board Game by River Horse

In the age of smartphones, an app for everything and even kettles you can control via WiFi (the dream, right?), we were totally blown away with the reaction of this stunning 80s-tastic Labyrinth Board Game. Despite Labyrinth being a commercial flop when it was launched, it quickly reached cult status and earned a permanent place in many 80s kids movie collections.
We love that people are still rocking board games and think they are the best way to really bring everyone together and enjoy a bit of nostalgic fun.

With the live action box office smash hit being released last year, it truly was the year of Beauty and the Beast. With soooo many fantastic products being created around this modern adaptation, there was was real chance for all fans of this iconic Disney take to get stuck into so many more goodies inspired by their favourte characters. Chip was really a headline act for us with sooo many people rushing to snap up our Chip cups. I mean… what a perfect mix of style and function right?!
We loved the details and finishing touches on this little chap, and apparently so many many others making this one of our top treats of 2017!

So there’s no denying 2017 was a big year for Star Wars. With everyone building up buzz through the year for the long-awaited Star Wars: The Last Jedi, the hunger for amazing Star Wars goodies has never been so big with many fans of the classics getting stuck into the new generation, and many new fans of the latest Disney films loving the wealth of amazing merchandise available for their new favourite franchise.
Clearly, this fun and funky design from Chunk featuring Darth Vader and a Stormtrooper taking some time for a selfie struck a chord with soo many fans snapping this up. One of our personal faves here too so we can’t blame them!

Okay… maybe not everyone had a blast in 2017. How do we know this? Well Mr Grumpy was sure busy this year with a whole heap of tshirt fans snapping up this exclusive design to either let the world know their current mood, or pass on to someone else to perhaps ‘send a message’. Either way this was still a front-runner through the year and from what we can see will continue to be a hit with Mr Men Little Miss fans.

Despite the first book being launched back in 1997, and the last film hitting our screens in 2011, there is still a HUGE buzz around Harry Potter which only seems to be growing stronger by the year. With a seemly unquenchable thirst for creative and new Harry Potter goodies that fans can really snatch up like a golden snitch, our Hogwarts Letter Wallet seemed to really cast a spell as it was a huge hit from the moment it joined us on the site and it’s not hard to see why.
With amazing detail and practicality, it’s the perfect mix of ‘oh I really like that’ and ‘oh and can actually really use this!’.

Once again Harry Potter taking the main stage with this super fun and useful Heat Change mug. Getting to sit down with a cuppa and enjoy the Marauders Map coming to life just like in the books and movies, bliss with a biscuit right?

Wondering what all the noise was and what possibly clogged up the local internet connection once a week on the dot? It was without a doubt the return of Stranger Things with the launch of season two on Netflix. Just like season one, we were treated to a wealth of action, suspense, amazing acting and characters, all cloaked in a warm glow of 80s nostalgia with amazing wardrobe, games and gadgets. Pretty much our perfect show right? Well… as it turns out not just us as it took the globe by storm and many of you wanted to share your passion for this hit with some of our exclusive TShirts and Sweaters. Thank you so much!

when two icons collide… you end up with one amazing design which has really hit it big in 2017. For a long time now, this vintage Pac-Man design has been a real favourite with fans and has once again made it in our big hitters list. Available from just £14.99 too, this design speak volumes and is just about as recognisable as they come. Great way to pay homage to the iconic arcade game and raise a few smiles along the way.

So there you have them folks! 2017 officially done but the fun sure isn’t over! We will be here to guide you through 2018 with even more amazing finds and designs that will always keep you entertained.

Plenty of coolness planned so watch this space peeps!

What was your favourite TruffleShuffle goodie in 2017? What would you like to see from us in 2018 perhaps? Let us know in the comments below.

It’s true folks! Winter Wedding season is coming! A wonderful time full of fantastic venues, food, friends, family, partying and the odd sore head (you know who you are), the beginning of Summer sees the arrival of many long-awaited events which have taken more time and planning than most full scale military operations.

Of course part of celebrating with your nearest and dearest on their special day is getting to dress up and look your very best. Something which we’re always more than happy to help you with in our own little way.

So! Giving you beautiful guys and gals out there a little sneak peek at some of our favourite items which we think just could complete your look, check out Our Top 10 Goodies You Need To Smash This Year’s Wedding Season…

It’s all fun and games at your next wedding reception with this totally cool pair of gamer cufflinks! Featuring an iconic gaming design, these are bound to get a smile from your fellow gamer lovers!

What an a-MAZE-ing suit! Featuring the most cult and classic of all arcade games, Pac-Man in a jazzy statement design, this is sure to earn you some cool points on the dance floor and will sure be something people won’t forget on a special day.

This DC Comics Photobooth Set is SUPER fun! Perfect for adding some extra POW to any Superhero lovers special day.

Up your ‘game’ in this awesome retro, gaming characters belt. A real gamers choice, this beauty will leave you and fellow guests totally pix-elated!

This is a subtle yet VERY cool way to show their appreciation for once of the worlds greatest sci-fi phenomenon’s ever, Star Wars! The silver metal tie slide, comes in the form of the weapon of choice, the Light Saber and is presented in a funky box, making it the perfect addition to your wedding get up for sure.

A childhood classic for many of us, this super simple but super iconic Lion King Simba design is such a great way to keep it classy and keep it retro!

Just like Ross in friends, you too can wear Batman’s suit….just perhaps in a slightly more ‘out there’ different way. Covered in the iconic logo, this amazing suit comes with matching tie to really complete the look.

This super cute pair of White Gold Plated Mickey Mouse stud earrings are the perfect accessory for any Disney fan! Simple yet classy don’t you think?

Let Dobby The House Elf assist you in your timekeeping on the big day with this delightful, official Harry Potter watch! Always good to know just how late the Bride really was huh!

Add some wizardy glam to your special look with this magnificent clutch bag featuring the Gryffindor logo!

So! Whatever you wear and whatever embarrassing things go down on the big day, we all hope you have a blast and don’t forget to grab some cake!