For as long as we’d possibly care to remember, we’ve known and loved the Teenage Mutant Ninja Turtles. From back as kids when we would totally not act out battle scenes and pretend to be our favourite Turtle (Leonardo obviously), we’ve been in love with these crime fighting dudes.

Thankfully, because we have the most awesome job in the world, we get to spend our days searching high and low for some of our favourite things, ready to pop them onto the site for the whole world to see and snap up for their very own. We know, it’s a hard life.

Feeding on our Leonardo, Donatello, Raphael, and Michelangelo love, we’ve just gotten our eager hands one some amazing new Teenage Mutant Ninja Turtles T-Shirts that are THE perfect way to show off your inner green hero in style. Take a peep….

Leonardo
The eldest, most disciplined and ultimately the fearless leader of the pack, Leonardo is a force to be reckoned with and is top of our ‘which one would you be’ list. 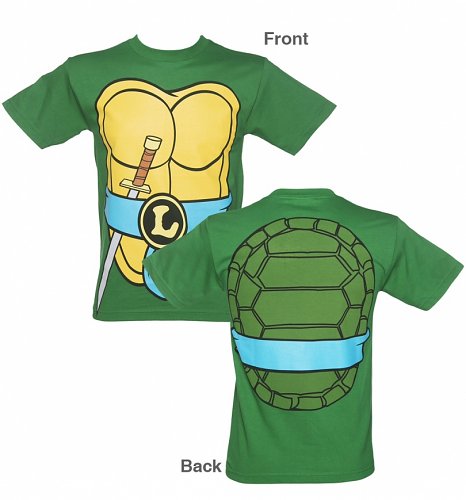 Michelangelo
On the other end of the scale, we have Michelangelo! The youngest, most enthusiastic and the real party dude in the gang, Michelangelo and his nunchakus are sure to be where the fun is at and will always be there to put a smile on people’s faces. If this sounds like you, this is the t-shirt for you! 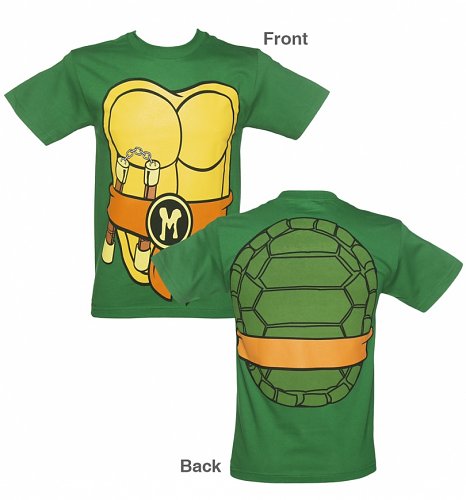 Donatello
A real master of the tech, inventor and all round genius, Donatello is the real brains behind the team and is sure to get them out of even the stickiest of situations with his know how. Slip this Donatello Costume tee on, grab a big stick and get ready to rock.

Teenage Mutant Ninja Turtles Lyrics T-Shirt
Show some love for the whole team in one go with this funky new lyrics tee!

For all these and a whole lot more, check out our huge range of official TMNT merchandise over at TruffleShuffle.co.uk.
So who is your favourite? Let us know by leaving a comment below….
xoxo

Great Barrier Reef! It’s the weekend so soon?! Must be time for another Retro Movie Rundown then huh!

Like an eager and oh-so clever Octopus working it’s way around the coral, we’re using our cunning and many talents to hunt down some of the coolest and most retro films ever. We’ll silently maneuver our way around the brightly coloured other worldly looking plants and rock before targeting in one our unsuspecting prey, launching quick as a flash and grabbing into our favourite films with all eight arms ready to feed our ever-growing hunger for 80s and 90s awesomeness.

.
The NeverEnding Story II: The Next Chapter (1991) E4 1:00pm-2:45pm (1 hour 45 minutes)
Young hero Bastian is once again transported into the magical world of Fantasia, where he must put a stop to the schemes of a wicked sorceress who now holds sway in the land. With the aid of a magical amulet, he is able to wield phenomenal power, but the witch sets a trap that threatens a calamitous future. Fantasy adventure sequel, with Jonathan Brandis and Kenny Morrison.

The Rugrats Movie (1999) Film4 3:15pm-4:50pm (1 hour 35 minutes)
Tommy tries to return his new brother to the baby shop, helped by Angelica, Chuckie, Phil and Lil – but the friends get lost in dense woodlands en route, turning their expedition into a scary and exciting journey of discovery. Animated comedy based on the TV series, with the voices of Elizabeth Daily, Christine Cavanaugh, Kath Soucie, Whoopi Goldberg and Busta Rhymes.

The Muppets Take Manhattan (1984) GOLD 4:05pm-6:00pm (1 hour 55 minutes)
Kermit, Miss Piggy, Fozzie Bear and company try to take Broadway by storm with their college show, setting the stage for a host of misadventures as they yearn for stardom in the Big Apple and set out to raise the money to finance their production. Comedy, performed by Jim Henson and Frank Oz, with appearances by Liza Minnelli, Art Carney, Dabney Coleman, Gregory Hines, Joan Rivers, Brooke Shields, Linda Lavin and Elliott Gould.

E.T.: The Extra-Terrestrial (1982) ITV2 5:10pm-7:30pm (2 hours 20 minutes)
A lonely boy befriends an alien who has been left stranded on Earth. The two develop a psychic connection as the boy helps the extraterrestrial to contact his own people and call for rescue. However, living on Earth starts to have a devastating effect on the visitor’s health, and a government operative is determined to capture him for study. Steven Spielberg’s sci-fi fantasy, starring Henry Thomas, Drew Barrymore, Dee Wallace and Peter Coyote.

Independence Day (1996) Channel 4 6:40pm-9:20pm (2 hours 40 minutes)
A fleet of huge flying saucers launches a devastating and unprovoked attack on Earth. As survivors try to flee the seemingly unstoppable alien invaders, the courageous US president, an ace pilot and a computer genius come up with a plan to take the fight to the enemy and save the human race. Roland Emmerich’s sci-fi adventure, starring Will Smith, Bill Pullman, Jeff Goldblum, Mary McDonnell, Randy Quaid, Robert Loggia and Harry Connick Jr.

Bill & Ted’s Excellent Adventure (1989) ITV2 7:30pm-9:20pm (1 hour 50 minutes)
Two dim-witted teenagers with dreams of rock stardom seem doomed to fail a school history project, unaware the future of the human race depends on their success. A time traveller is given the job of making sure they pass the test by sending them on a series of adventures in the past. Comedy, starring Keanu Reeves, Alex Winter and George Carlin.

Enemy of the State (1998) BBC3 9:05pm-11:10pm (2 hours 5 minutes)
A chance encounter with an old friend derails a successful lawyer’s fast-track career, plunging him headlong into a deadly game of cat and mouse with relentless government agents capable of anticipating his every move. He quickly realises the only way to save his own life is to expose the truths his pursuers seem so intent on covering up, and seeks out a former intelligence agent to take them on at their own game. Thriller, starring Will Smith, Gene Hackman, Jon Voight and Lisa Bonet.

Fun Fact: The mark left on the mailbox to signal Brill is exactly how ex-CIA official and traitor Aldrich Ames signaled the Soviets when he made a drop.

Backdraft (1991) ITV London 10:20pm-12:50am (2 hours 30 minutes)
The two sons of a fireman who died in the line of duty follow him into the profession. However, a feud develops between them because the elder brother is convinced his sibling is not up to the job – until a mission to uncover the identity of a serial arsonist gives him the chance to prove his worth. Action drama, starring Kurt Russell, William Baldwin, Robert De Niro, Jennifer Jason Leigh and Donald Sutherland.

.
Willy Wonka and the Chocolate Factory (1971) Channel 5 4:40pm-6:40pm (2 hours)
An eccentric confectionery king announces that five children will be given a tour of his wondrous factory. The winners turn out to be a kind-hearted boy from a penniless family and four obnoxious brats, who face a terrible fate when they misbehave. Musical fantasy, based on Roald Dahl’s classic book Charlie and the Chocolate Factory, starring Gene Wilder, Jack Albertson, Peter Ostrum and Roy Kinnear.

Charlie and the Chocolate Factory T-Shirts

Inspector Gadget (1999) Film4 5:20pm-6:55pm (1 hour 35 minutes)
A clumsy security guard is critically injured during a run-in with a thief, so his cybernetics-expert employer transforms him into the ultimate crime-fighting machine – a bionic officer with an array of gadgets and weaponry cunningly concealed inside his body. Disney comedy adventure based on the 1980s cartoon series, starring Matthew Broderick, Rupert Everett and Joely Fisher.

Big (1988) E4 6:00pm-8:05pm (2 hours 5 minutes)
A boy ridiculed for his size makes a wish on a fairground machine to become bigger – only to wake up as a 30-year-old man. Driven from his home by his terrified mother, the bewildered youngster trapped in a grown-up body makes his way to New York, where he rises high in the ranks of a toy manufacturing company and applies his youthful enthusiasm to the complexities of adult life. Comedy, starring Tom Hanks, Elizabeth Perkins and Robert Loggia.

Spider-Man (2002) Channel 5 6:45pm-9:00pm (2 hours 15 minutes)
A clumsy teenager develops superhuman powers after a genetically engineered spider bites him. At first his fantastic skills delight him, but his elation is severely tempered by a family tragedy, prompting him to dedicate his talents to combating evil. However, he faces a baptism of fire in the form of crazed villain the Green Goblin. Comic-book superhero adventure, with Tobey Maguire, Kirsten Dunst, Willem Dafoe, James Franco and Rosemary Harris.

Raiders of the Lost Ark (1981) BBC3 8:10pm-10:00pm (1 hour 50 minutes)
Intrepid archaeologist Indiana Jones goes in search of the legendary Ark of the Covenant, a biblical artefact of devastating power. His quest leads him to Egypt, where the Nazis are plotting to use the Ark to further Hitler’s plans for world domination – aided by Jones’s deceitful French rival. Steven Spielberg’s action adventure, with Harrison Ford, Karen Allen, Paul Freeman and John Rhys-Davies.

Copycat (1995) Film4 11:05pm-1:30am (2 hours 25 minutes)
A gifted psychologist who is an authority on serial killers is left traumatised by an attempt on her life and becomes agoraphobic. Unable to leave her apartment, she nevertheless aids the police in the pursuit of a publicity-seeking mass murderer re-enacting famous killings. Thriller, with Sigourney Weaver, Holly Hunter, Harry Connick Jr, Dermot Mulroney, William McNamara and Will Patton.

Whatever you’re up to this weekend,