Poseidon’s Trident! It’s been three weeks since my last confession, I mean Movie Rundown! First came the great flood and then I went on me holibobs for two weeks but you’ll be glad to know all I did was laze about in my pants watching films 😉 You’ll be less than thrilled to know that the movies I watched were the likes of “Mega Shark V’s Giant Octopus” and “Two Headed Shark Attack” both brilliantly terrible films you’re sure to agree so I watched them twice (totally deserve an Oscar!)

Also I’m to believe that someone else took over my duties as “Captain Film Dude” (official title – I have a badge and everything) and probably suggested you watched “Spiderman” and “Transformers” for three weeks! That menacing doppelganger must be stopped.

Never the less I’m back so that must mean it’s the weekend Hooray! for us. So like the blistering hot sun showering us with rays of golden retro joyfulness as we stand buried waist deep in sand on a beautiful tropical beach let us be your bucket and spade and build you a nostalgic movie masterpiece.

Breakfast at Tiffany’s (1961) Film4 3:05pm-5:20pm (2 hours 15 minutes)
An aspiring writer falls for a seemingly happy-go-lucky woman living in the same apartment building, and is drawn to her unconventional lifestyle. However, he detects her quirky demeanour is masking a colourful past, while her mysterious visits to an imprisoned gangster have unexpected consequences. Romantic comedy drama based on Truman Capote’s novel, with Audrey Hepburn, George Peppard, Mickey Rooney and Martin Balsam. Hudson Hawk (1991) Sky Movies Crime & Thriller 3:30pm-5:15pm (1 hour 45 minutes)
A cat burglar fresh out of prison is blackmailed by a couple of crazed billionaires into stealing the hidden components of a device created by Leonardo da Vinci that will allow them to turn lead into gold. He also has to contend with the CIA following his every move. Comedy adventure, starring Bruce Willis, Danny Aiello, Andie MacDowell, Richard E Grant, Sandra Bernhard and James Coburn

Ghostbusters II (1989) Watch 10:40am-12:50pm (2 hours 10 minutes)
The eccentric spectre-hunters reunite to save New York from a massive river of slime generated by the citizens’ negativity and nasty thoughts. Meanwhile, the spirit of a 16th-century tyrant tries to return to the land of the living by possessing the body of a toddler. Sequel to the supernatural comedy, starring Bill Murray, Sigourney Weaver, Dan Aykroyd, Harold Ramis, Rick Moranis and Ernie Hudson. The BFG (1989) ITV3 3:55pm-5:45pm (1 hour 50 minutes)
A friendly giant befriends a lonely little girl and transports her to a strange land. Unfortunately, a number of the other giants there have acquired a taste for eating children. Determined to stop their nefarious habit, the pair set out to charm the Queen of England into putting her armed forces at their disposal. Animated adventure, based on Roald Dahl’s classic tale, with the voices of David Jason, Amanda Root and Angela Thorne.

Home Alone 2: Lost in New York (1992) E4 7:30pm-10:00pm (2 hours 30 minutes)
Hapless youngster Kevin somehow manages to catch the wrong plane and finds himself heading for New York, while his family jets off to Florida. Having got his hands on his father’s credit card, he is enjoying the good life staying in a luxury hotel – until he bumps into two familiar burglars with an axe to grind. Comedy sequel, starring Macaulay Culkin, Joe Pesci, Daniel Stern, Brenda Fricker and Tim Curry.

Rushmore (1999) Sky Movies Indie 6:20pm-8:00pm (1 hour 40 minutes)
A student causes chaos in an exclusive private school with his temperamental nature – and things go from bad to worse when he develops a crush on a teacher. A wealthy but miserable businessman strikes up a friendship with the troubled teenager, but when he also falls for the same woman, all-out war is declared. Wes Anderson’s comedy drama, starring Jason Schwartzman, Bill Murray, Olivia Williams and Brian Cox.

The Witches of Eastwick (1987) ITV3 9:00pm-11:20pm (2 hours 20 minutes)
Three single women dabble in magic to conjure up the perfect lover, and unintentionally summon Satan himself, who seduces them one by one. They come to realise the danger the lecherous devil presents and decide to end their relationships, but the infernal rogue does not take kindly to rejection. Fantasy comedy based on John Updike’s novel, with Jack Nicholson, Cher, Michelle Pfeiffer and Susan Sarandon.

It’s a Roald Dahl weekend for sure, probably due to Roald Dahl Day http://www.roalddahlday.info/. My favourite Dahl book has to be George’s Marvelous Medicine which is about an eight year old boy who’s fed up with his Grandma’s selfishness, grumpiness and general meanness towards him, especially after he discovers her dark secrets! George seeks to cure the scary old lady by brewing up a very special medicine for her to disastrous consequences. That definitely needs to be a movie don’t you think!

Whatever you’re up to this weekend have fun, take care, enjoy yourselves, don’t run with scissors, wear wellies and tuck your shirt in………….!

Bye bye till next time. 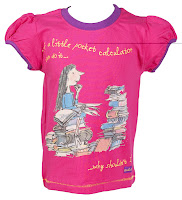 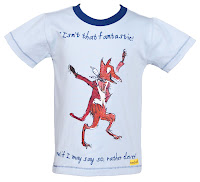 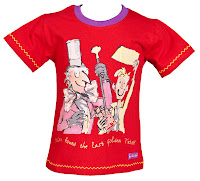 Roald Dahl had an amazing way with words and all of us here at TruffleShuffle loved his gruesomely wicked tales! Now you can spread your love of literature and creepiness to the next generation with these awesome new tees from Fabric Flavours!