Starting life as a menswear label in 1996, Addict has developed a signature style of streetwear that blends classic casual wear with the performance, quality and functionality of high spec outerwear. The brand has over a decade’s worth of heritage in the streetwear genre, its roots run deep in the design, music and board sports communities crossing over both to the underground and mainstream alike since birth. Long a favourite of the freesports fraternity, Addict is much more than your common or garden clothing range. Despite the rapid growth in popularity and distribution over the years, Addict has a tight, focused team of individuals who are intensely passionate about the brand and keep a tight reign over its development, producing all clothing, graphics and media for the mainline in-house, focusing on product development, letting the brand evolve naturally rather than bending to fit in with fashion.
Addict regularly work with and support a collection of independent highly sought after artists and illustrators on the more limited edition ‘artist series’ ranges. A reflection of their general company ethos, the artists and designers Addict work with are sourced mainly on a social basis. The limited edition artist series tees and related products have seen Addict working with a plethora of contemporary talent including long time collaborators She One, C-Law, Mitch and Swifty, Mode 2, Jimi Crayon, Ben Swift, Guy Featherstone, Shogun™, Will Barras, Mr Jago, and Steff Pleatz to name but a few.
Launching this week of TruffleShuffle is our first drop of tees from their much anticipated instalment of Addict X Star Wars tees, featuring art from long time Addict collaborator Mitchy Bwoy. Staying true & accurate to the original Star Wars designs from the Star Wars Trilogy, this collection of tees show Mitch’s unique, highly detailed, hand drawn vector style which he mixes with a keen colour sense and a healthy dose of ink and spray paint to lethal effect.
“Brought up in the Shires of the North of England, Mitch’s fascination with design and illustration was initiated by a love of comics and the Star Wars phenomenon. His first true influence was Ralph McQuarrie (Star Wars’ chief illustrator) and, much do the disapproval of various art teachers, he spent most of his early years in the realms of fantasy art and graffiti. Concentrating on what he calls ‘hip hop surrealism’ during his design degree, Mitch spent his final degree year working at Swifty’s London studio. As Mitch was already a huge fan of Swifty’s work for Mo Wax and Straight No Chaser magazine, this was a logical progression and served as a valuable apprenticeship. Working from his own London studio over the last 10 years, Mitch has carved his own niche not only in music cover design but also in illustration, fashion and more recently, video production. His work has become synonymous with new music and club culture, working alongside the most prominent musicians of the last decade, including; Amp Fiddler, Bugz in the Attic, Incognito, The Bees, Howie B and many others. In addition, Mitch has worked on many special projects, live paints and collaborations with other artists; 55 Roots for 55 DSL (live paint and group art show with Dragon and Shibuya from Japan), Bacardi brand development (with Mode 2) and Black Twang/We Love You album projects (with Banksy). His reputation has also led to his inclusion in numerous art shows, such as; the Art Basel/ Miami (alongside Doze Green, Swoon, Rostar), Candela Festival/Puerto Rico (with Swifty, Mode 2 and HVW8) and Board / London (with Jamie Hewlett and Pete Fowler).” His series of inter galactic Star Wars designs pay homage to the timeless quality of the original designs featured in the original films released over 30 years ago… Check them all out below…. Here at TruffleShuffle – we pride ourselves in providing the most exciting range of t-shirts possible! We are home to some pretty awesome brands, and are constantly on the look out for new and exciting ranges. One of our favourite brands is Chunk – and with designs like this, how could blame us?

The recent addition: The Men’s White Star Wars Boombox Trooper t-shirt, is no exception when it comes to originality, on a comfortable stylish t-shirt… We stock a whole range of Men’s Chunk T-shirts (starting from a size XS) so head over to www.truffleshuffle.com and have a browse of all our latest designs. You will find the likes of Star Wars t-shirts, quirky Pac-man designs, Ren and Stimpy t-shirts, Mickey Mouse and Bert and Ernie!

For our full selection of Chunk T-shirts click here.

If you thought you saw Darth Vader or one of his stormtroopers on your way into work yesterday – fear not, you weren’t going mad!

To celebrate the launch of the Kinect Star Wars game on the on Xbox 360, Darth Vader, a bunch of Stormtroopers and R2-D2 undertook an imperial invasion of London.

There have been no reports of Vader having to use his death grip in this mornings rush hour, though judging by these commuters’ (lack of??) reaction to the Star Wars characters presence, it’s unlikely anyone would notice.

Here at TruffleShuffle our range of officially licensed Star Wars T-Shirts & Gifts seems to be growing faster than the Millennium Falcon in hyperdrive. So what better time to give you a quick rundown on some of my favourite t-shirts.

Whether you’re an AT-AT addict, a sucker for a Stormtrooper or go delirious for Darth we have something you’ll love! Our wide range of products owes thanks to some great brands creating even greater designs!! Chunk, Junkfood and Fabric Flavours have created some real gems. Chunk cleverly mix your favourite characters into modern day situations bringing a fun twist to some classic intergalactic stars. Junk Food boast some seriously retro artwork, these will definitely ‘flick the switches’ for all the die-hard Star Wars fans. And don’t think we’ve forgotten about those up and coming Luke Skywalkers as Fabric Flavours has some brilliant t-shirts and babygrows.

With such an ‘out of this world’ collection of brilliant officially licensed Star Wars t-shirts and gifts I thought I’d better pick out some of my highlights.

First off, A surfing Wookie. I can’t imagine paddling to catch that perfect wave when suddenly a wookie ‘drops in’ on you and steals that perfect moment. Luckily, this probably isn’t going to happen but that didn’t stop Chunk creating this amazing design. Yours for just £27.99.

Continuing the sports theme, have you ever wondered what what Yoda’s right hook would feel like? Well, it turns out when he’s not busy being a Jedi master or a DJ for that matter he like nothing more than a few rounds in the ring. This t-shirt from Chunk is an absolute knock out at £27.99 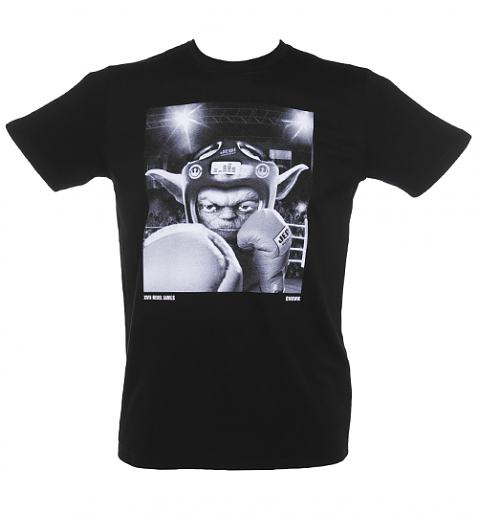 Next is possibly my favourite form of transport. If I could arrive at work in anything it would have to be an AT-AT. This fantastic retro print t-shirt from JunkFood allows all AT-AT addicts to share the love too. £29.99 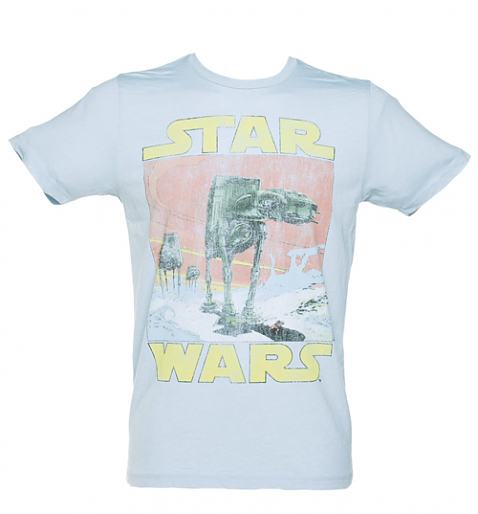 If you were going to start your own Darkside Race team there is only one group who you’d rely on to be your pit team. They’re already dressed to comply with current health and safety regulations so they only need to be taught how to change a tyre. And in this fab Chunk print they appear to be doing a fantastic job. But then with a ruthless boss like Darth Vader watching, wouldn’t you? £27.99 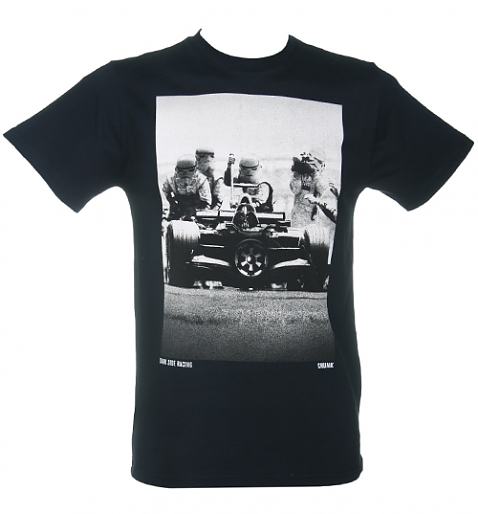 With so much to choose why not go and check out even more styles here.

Christmas is creeping ever closer and I’m sure some of you out there are already panicking about what special gifts you can get for the man in your life but fear not because I’m here to help with my handpicked selection of great gifts for boyfriends.

We’ve come up with our very own Gift Finder which is perfect for tweaking your search to help find the exact sort of gift he’ll love.  Going out with a Rock God, a Movie Buff or even a wannabe Superhero?  We have loads of great gifts perfect for his tastes, give it a try here!

Being a bit of a retro gamer geek myself I know I would personally love to receive some of these old skool treats that would remind me of the great computer games from my youth.

Check out our awesome Tetris Heat Change Mug that changes appearance with the heat of your cuppa!  And what about these gaming treats, our Pac-Man Alarm Clock, super popular Pac-Man Belt and my personal favourite this Sesame Street Invaders T-Shirt which puts the Sesame Street gang into the world of Space Invaders – all great gift ideas for gaming geeks!

Maybe your boyfriend is a bit of a Movie Buff, in which case we’re sure he will love some of these great film T-shirts.

See Bowie do his thing with the Dance Magic Dance Labyrinth Poster T-Shirt, pay tribute to Ghostbusters with this Don’t Cross The Streams T-Shirt, Star Wars fans will love the Boxing Stormtroopers Photographic T-Shirt and our Gizzy is the Shizzy T-Shirt is just perfect if he’s a Gremlins fan.  A great selection of classic movie tees!

And finally we present the opportunity to make the boring old tradition of gifting pants and socks fun again!  Check out these cool Vintage Print Optimus Prime Transformers Boxer Shorts or give his confidence a boost with the ultra cheeky Monty Python Biggus Dickus Boxer Shorts, just what every man wants to hear!

We’ve got socks covered too; make him feel like a hero with our Superman Figure Socks or if he’s a film fan, our Ghostbusters Assorted Socks Gift Set would be perfect.

I hope this has helped all of you that are struggling for ideas, if you are still looking for some more inspiration check out our Gifts for him link to get the full list of men’s pressie ideas.  There’s tons of possible presents for him waiting to be found!