Skip to content
As the anticipation builds for your next delivery, any sounds of cars or footprints become ‘the ones’ you been waiting for. As the moment you finally have your new goodies in your hands becomes closer and the excitement builds, you simply cannot wait any longer and wonder how you ever lived without them before!

Rugrats in Paris: The Movie (2000) Film4 1:00pm-2:35pm
The lucky little tots embark on a trip to a French theme park – but while the rest of the gang are intent on enjoying themselves, Chuckie is distracted by his wish for a new mum. He sets his sights on the owner of the amusement park as a prospective partner for his single dad. Animated adventure, with the voices of Christine Cavanaugh, Elizabeth Daily, Cheryl Chase, Kath Soucie and Susan Sarandon.
END_OF_DOCUMENT_TOKEN_TO_BE_REPLACED

As scary as it seems, Halloween is just around the corner! Well where did year go? Here at TruffleTowers we loooove this time of year, getting to create and dress up as some of our favourite spooky characters, or maybe even turning some not so frightful icons into their zombie or vampire versions. Or if you’re feeling lazy, simply rock one of our amazing Movie T-Shirts which includes some horror classics too. How can you not love that right?

Well! To help get you ghoolish guys and wolftastic women into the Halloween spirit, we thought we would make a quick list of some of our all-time favourite horror films that really give us the heebeegeebees. Now sit back, check behind the sofa obviously and enjoy some of these 80s classics!

A Nightmare on Elm Street

Teenagers in a small town are dropping like flies, apparently in the grip of mass hysteria causing their suicides. A cop’s daughter (Heather Langenkamp) traces the cause to child molester Fred Krueger (Robert Englund), who was burned alive by angry parents many years before. Krueger has now come back in the dreams of his killers’ children, claiming their lives as his revenge. With a supporting cast that includes horror veterans like John Saxon and Ronee Blakley, director Wes Craven creates moments of real dread by examining the line between nightmares and reality, as well as the “sins of the parents” theme. ~ Robert Firsching, Rovi

“All work and no play makes Jack a dull boy” — or, rather, a homicidal boy in Stanley Kubrick’s eerie 1980 adaptation of Stephen King’s horror novel. With wife Wendy and psychic son Danny (AKA Redrum boy to us) in tow, frustrated writer Jack Torrance takes a job as the winter caretaker at the opulently ominous, mountain-locked Overlook Hotel so that he can write in peace. Before the Overlook is vacated for the Torrances, the manager informs Jack that a previous caretaker went crazy and slaughtered his family…as you do…but Jack thinks it’s no problem, but Danny’s “shining” hints otherwise. All is not what it seems and madness insumes! Such a classic! Financial troubles force a recent divorcee and her teenage sons Mike and Sam to settle down with her father in the California town of Santa Carla. At first, Sam laughs off rumours he hears about vampires who inhabit the small town. But after Mike meets a beautiful girl at the local amusement park, he begins to exhibit the classic signs of vampirism. Fearing for his own safety, Sam recruits two young vampire hunters to save his brother by finding and destroying the head vampire. 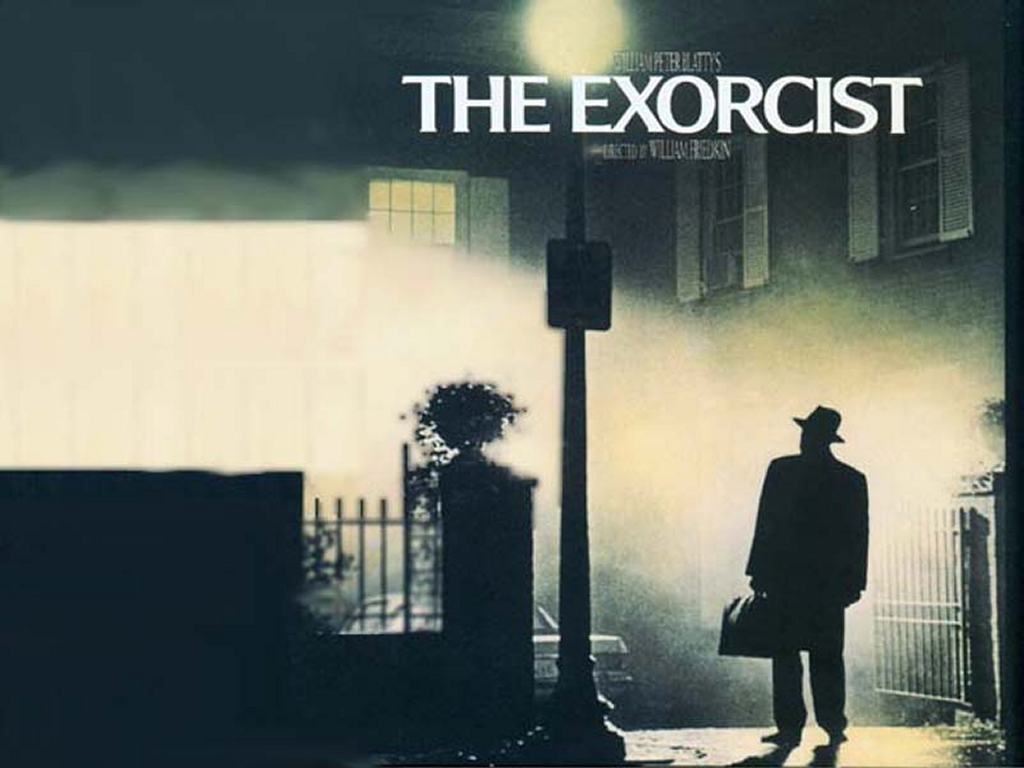 At the time, this was one of the scariest films ever made! Sooo many people can tell you about the buzz and drama the release of this film caused with people all over fainting, being sick, running out of the cinema….you name it! As so many greta films are, this was adapted from a novel by 1971 William Peter Blatty, and is still considored to be one of the best horroe films ever made. Watch it now!

While wandering the English moors on vacation, American college students David and Jack happen upon a quaint pub with a mysterious patronage who warn them not to leave the road when walking after dark. Irreverent of such advice as characters in horror films always are, the two decide to find a short cut….David wakes up in the hospital with a nasty bite wound to his shoulder; the freshly deceased, and rapidly decomposing, Jack arrives soon after to deliver the grim news that, unless he commits suicide, David will become a werewolf when the moon is full. David dismisses the encounter as a hallucination, but all indicators point to lycanthrope; evenings of barking and bloodletting follow closely behind. Looks pretty girm huh! Considered fairly gruesome in its day, the original 1958 The Fly looks like Mister Rogers’ Neighborhood compared to this 1986 remake. Jeff Goldblum and Geena Davis star as Seth Brundle, a self-involved research scientist, and Veronica Quaife, a science-magazine reporter. Inviting Veronica to his lab, Seth prepares to demonstrate his “telepod,” which can theoretically transfer matter through space. As they grow closer over the next few weeks, she inadvertently goads Seth into experimenting with human beings rather than inanimate objects. Seth himself enters the telepod, preparing to transmit himself through the ether, but he doesn’t know that he is sharing the telepod with a tiny housefly. Classic stuff!

Thanks to the carelessness of a cute little dog, newlyweds Geena Davis and Alec Baldwin are killed in a freak car accident. Upon arriving in the outer offices of Heaven, the couple finds that, thanks to a century’s worth of bureaucratic red tape, they’re on a long celestial waiting list. Before they can earn their wings, Davis and Baldwin must occupy their old house as ghosts for the next fifty years. Alas, the house is now owned by annoying yuppies Catherine O’Hara and Jeffrey Jones. Horrified at the prospect of sharing space with these obnoxious interlopers, Davis and Baldwin do their best to scare O’Hara and Jones away, but their house-haunting skills are pathetic at best. In desperation, the ghostly couple engage the services of a veteran scaremeister: a yellow-haired, snaggle-toothed, profane, flatulent “gonzo” spirit named Beetlejuice. The problem: Beetlejuice cannot be trusted-especially when he falls in love with O’Hara and Jones’ gloomy, black-clad teenaged daughter Winona Ryder.

And thaaaaat’s a wrap folks! There are plenty of amazing horror films for you guys to get tucking into this Halloween so go wild!

Looking for an easy costume for this year? Check out some of our cool tees that can be used to make this year effortlessly spooky 🙂

Are there any other horror flicks you love to watch this time of year? Spread the word by leaving a comment below. Thanks!