Calling all you Cookie Monster fans out there! We’ve got a tasty treat for you all here that’s warm, gooey with just the right amount of crunch, all topped off with some chocolate chips, glass of milk….okay okay we’ll rain it in! Back to the T-Shirts!

That’s right folks….we’ve been busy doing our research for one of our latest designs that’s just been added to our store. Once we’d cleared away all the cookie packets and crumbs from our desks (diet starts tomorrow), we’ve come up with one of our all-time favourite designs featuring one of our Sesame Street heroes.

Featuring our classic vintage style prints and pack with colour whether it’s from our amazing ladies orange tee or men’s blue style, there’s something for everyone.

But it’s not just TShirts! That’s right we’ve also popped this amazing print onto our stunning and oh so flattering ladies vests!

He may be bias, but it looks like the Cookie Monster is dishing out some sound advice on this awesome grey vest!

We nom-ally wouldn’t over indulge, but when cookies are involved, we just can’t say no! Great advice from one of our fave 80’s characters and real must haves for any Sesame Street fan.

What do you think? Don’t forget to check out our complete range of Sesame Street T-Shirts today for even more inspiration.

Everyone loves a good reunion right?! With so many TV Shows and live performances popping up all over the country including the likes of 5ive, Bewitched, and who can forget The Spice Girls during the London Olympics Opening Ceremony, however weird but impressive that might have been.

Well! It seems that the fever has spread and has sparked the amazing reunion of some of the cast member from cult TV show The Fresh Prince of Bel Air. That’s right, Carton (Alfonso), Jazz (Jeffrey A. Townes), and of course Will Smith (ermm Will Smith) were seen on their way to an evening out together looking not a huge amount like their former selves it must be said….except Will who will always be cool in our eyes.

Looking dapper guys! Long gone are the epic 80s-90s loud threads that we all grew up with. What were we thinking?!

Not only that! The amazing retro duo also took to the small screen once more, and in amazing style in Graham Nortons Friday night show. Will Smith gave an amazing performance with his film star son Jaden (AKA The Karate Kid 2010 AND upcoming After Earth film star) and were later joined by Frish Prince star Carlton Banks played by Alfonso Ribeiro who threw some classic shapes from the show. Take a peep…. 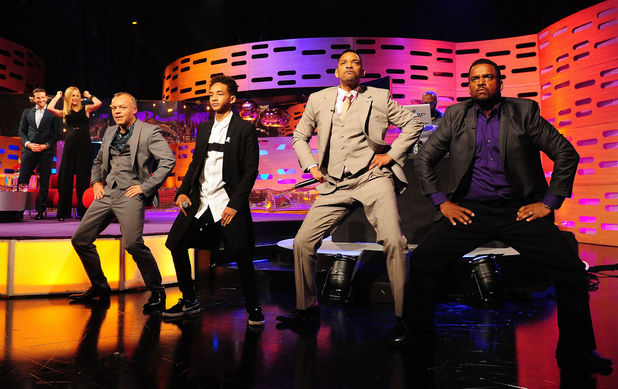 Did you catch the show? What did you think?

This has certainly got some crazy ideas of them filming something together once again, but sadly we think that idea will remain only in our wildest dreams.

If you’re as big a Fresh Price fan as we are, you’ll love our amazing range of retro Fresh Prince T-shirts and Will Smith Tees!