Did you know, it’s National superhero day today? As if we ever needed just ONE day to love all things superhero, huh! We’re always sharing our love for our top heroes in tights and lately, so have you too!

This week, we shared a post on our Facebook and Instagram asking you to share who you think your Batman is from some of the awesome people who have donned the cape and you answered in your hundreds!
. 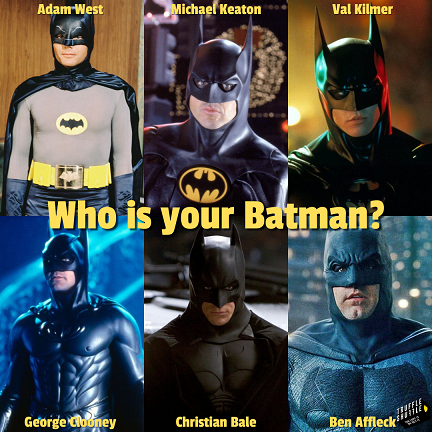 .
Seeing as this is some of the coolest and geeky research we’ve ever done, we couldn’t keep the results to ourselves so we donned our latest Batman TShirt, crunched some numbers and the results are in! Let’s see who got your votes…
. 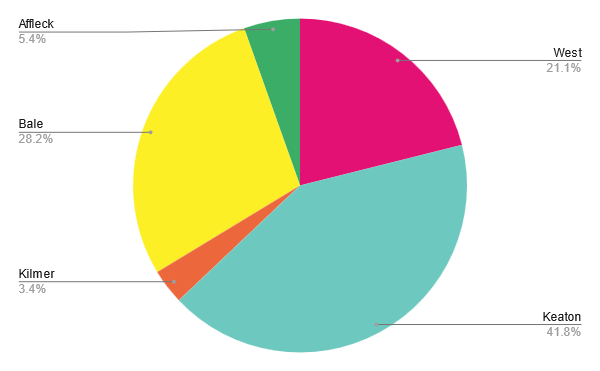 Let’s showcase the results one by one. In order, here at THE best Batmans ever as voted by you…

.
Straight to the top spot as a clear favourite, Keaton has clearly one a lot of hearts in his truly epic performances in Batman (1989) and Batman Returns (1992), both directed by Tim Burton.
Both films and performances are considered to be some of the strongest in the series and true faves amongst fans.

.
A truly iconic cast for Batman, Bale is in a well-earned second spot for his performances in Batman Begins (2005), The Dark Knight (2008), and The Dark Knight rises (2012), otherwise known as ‘The Dark Knight Trilogy’.
Widely considered some of the most successful and celebrated Batman films and directed by Christopher Nolan, these will always have a place in our movie collection.

.
There’s no denying the truly iconic role of Adam West as Batman! From 1966, West became Batman for TV, cartoons and movies. It’s safe to say, early Gotham was a pretty odd and random place to be with so many classic moments and dodgy special effects to match. Batman Shark Repellent anyone?

.
In 2016 we were first introduced to Batfleck with his first appearance as the caped crusader in Batman v Superman: Dawn of Justice. Affleck later popped on his major metal outfit again in Suicide Squad (2016) and Justice League (2017). We’ve always seen Afflecks roles as Batman being one of the strong points for all films he has featured, maybe others needed more convincing.

.
Taking the franchise in a new direction back in 1995 with Batman Forever, things moved from the more gothic style to a much brighter, more 90s version with Kilmer donning the cape for the role. Not considered to be one of the most successful films and castings ever, Kilmer didn’t stick around after this one release.

.
In a strange way, casting the legendary Clooney as Bruce Wayne was such an amazing move, but having him appear in the cape and pointy ears just never clicked for a lot of us. Appearing in only one film, Batman and Robin in 1997, it seems Clooney was never destined to be a superhero in this case with pretty much zero votes from TruffleShuffle fans!

So there they are! The best ever big-screen Batman roles as voted by you.
If all this Bat chat has got you looking for awesome new ways to show your love for this true DC legend, swoop on down to our site and pick up one of our official Batman logo T-Shirts, Batman gifts or accessories.

The Ultimate Batman As Voted By You!

by iain time to read: 2 min
Movies Top Shows and Films Coming To Netflix In May 2021!…
Movies 10 Things You Didn’t Know About The Karate K…
0