By the power of Greyskull! It’s only the Weekend!

So like the humble Koala quietly munching on eucalyptus. Let us be your aboriginal guide as we lead you on a walkabout through the Outback to find  cinematic tranquillity, we’ll encounter kangaroos with pouches full of retro movie mayhem and we’ll rest and play our didgeridoo as the sunsets to celluloid wonder. Big (1988)Sky Movies Comedy 4:40pm-6:25pm (1 hour 45 minutes)
A boy ridiculed for his size makes a wish on a fairground machine to become bigger – only to wake up as a 30-year-old man. Driven from his home by his terrified mother, the bewildered youngster trapped in a grown-up body makes his way to New York, where he rises high in the ranks of a toy manufacturing company and applies his childlike brain and emotions to the complexities of adult life. Comedy, starring Tom Hanks, Elizabeth Perkins and Robert Loggia.

Gremlins (1984)Watch 10:00pm-12:10am (2 hours 10 minutes)
A teenager is given a strange, cute creature as a Christmas present by his eccentric father and warned to keep it away from water, not to feed it after midnight, or expose it to direct light. However, a chance dousing causes the furball to spawn a horde of murderous little monsters, and their devilish antics bring mayhem to a small town. Comedy horror, with Zach Galligan, Phoebe Cates, Hoyt Axton and Polly Holliday.

Backdraft (1991)ITV4 10:10pm-12:50am (2 hours 40 minutes)
The two sons of a fireman who died in the line of duty follow him into the profession. However, a feud develops between them because the elder brother is convinced his sibling is not up to the job – until a mission to uncover the identity of a serial arsonist gives him the chance to prove his worth. Action drama, starring Kurt Russell, William Baldwin, Robert De Niro, Jennifer Jason Leigh and Donald Sutherland.

Planes, Trains and Automobiles (1987)E4 11:20pm-1:10am (1 hour 50 minutes)
A stressed businessman just wants to make it home to spend Thanksgiving with his family. However, when his flight is forced to land miles from its destination, he finds himself sharing a disaster-strewn journey across America with an amiable but slobbish salesman. Comedy road movie, starring Steve Martin, John Candy, Laila Robins, Kevin Bacon and Michael McKean

The Addams Family (1991)Film4 1:00pm-2:55pm (1 hour 55 minutes)
Creepy couple Morticia and Gomez find their unconventional life threatened by a man claiming to be a long-lost relative. When they welcome him with open arms, they fall prey to a plot that could cost them their ancestral home and the family fortune. Black comedy based on the 1960s TV series, starring Anjelica Huston, Raul Julia, Christopher Lloyd, Christina Ricci, Jimmy Workman and Carel Struycken

Mannequin (1987)Channel 5 1:55pm-3:40pm (1 hour 45 minutes)
A struggling artist gets a job as a window dresser for a department store, only to discover one of his dummies is a reincarnated Egyptian princess who comes to life at night. As he falls for the living doll, she inspires him to transform the shop’s display and make it the most spectacular in town. Fantasy comedy, starring Andrew McCarthy and Kim Cattrall.

Clueless (1995)Film4 2:55pm-4:50pm (1 hour 55 minutes)
A rich high-school student uses all her charm and financial clout to boost a new pupil’s image, but soon finds she has created a monster -while her own popularity suffers in the process. Comedy inspired by Jane Austen’s Emma, starring Alicia Silverstone, Stacey Dash, Brittany Murphy and Paul Rudd.

Whatever you get up to this Weekend remember to keep a tin foil hat just in case and always enjoy yourselves.

Now there’s no shocked faces among those of you reading this that we’re huuuuuge 80s films lovers which of course inspired our simply epic range of Movie T-Shirts *wink wink*. Being raised at possibly one of the most exciting decades for cinema (not biased at all!), with huge special affects looking ever more real ‘ahem’ and the stories taking us into far and distant lands where anything and everything was possible, we’re sure that the 80s was THEEE time that brought about some of the most iconic films that even today people can get excited about watching.

During this rose tinted time, the western world was pretty sure footed in its cinema going days, sadly however in the African country of Ghana and other surrounding countries, the film industry was only really just taking off. 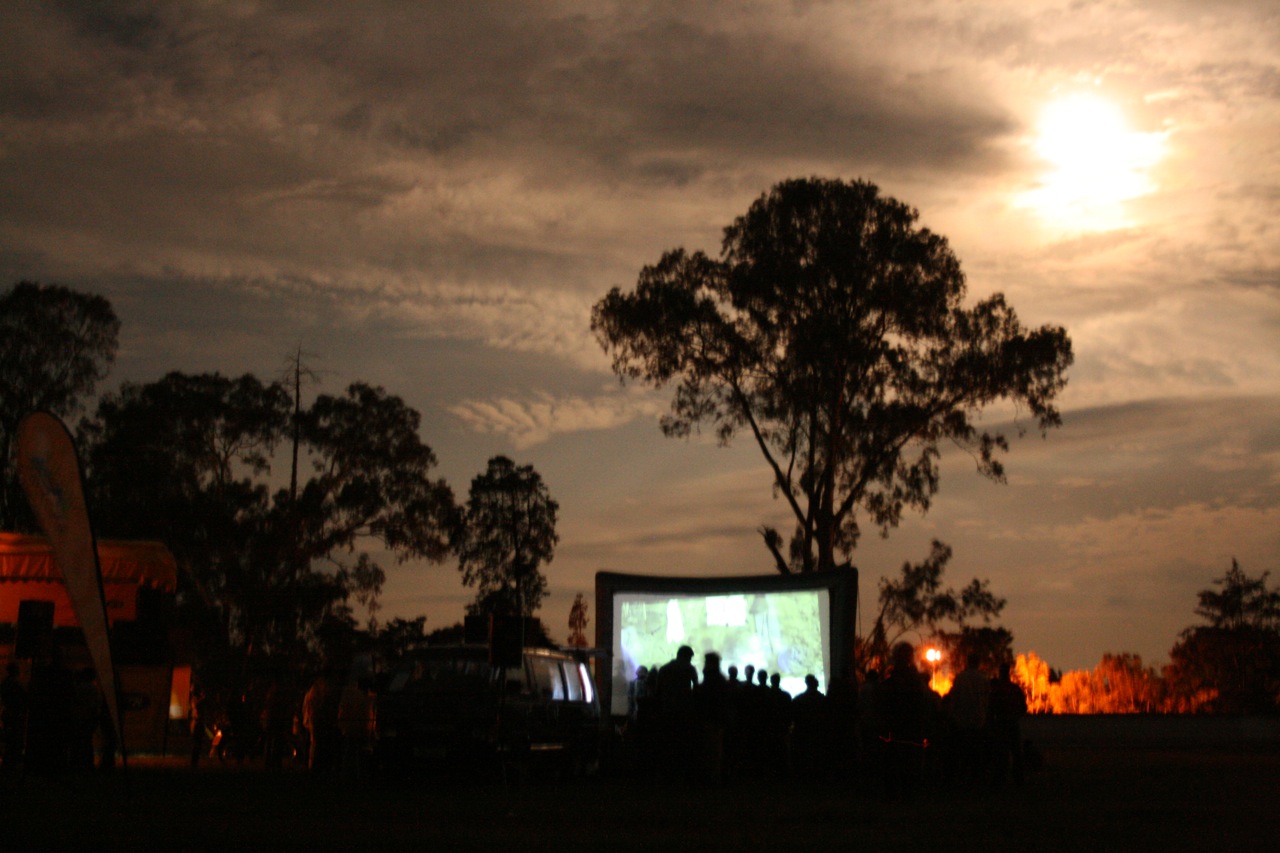 With very little disposable income available to most people, the idea of building big cinema complexes seemed like a distant dream (and sadly still is in a lot of areas). So! Instead, small companies would go around with portable TVs, video players and a bag full of videos, visiting every town or village in turn, with film ‘screenings’ taking place in schools during the day, and outside at night.

Now to really bring in the crowds, these little pop up screens would commission artists to re-create some of the most iconic movie posters to advertise what they would be showing. This has resulted in some pretty amazing takes on the classics which is what we’d like to show you know……sit back and enjoy! James Bond – The Spy Who Loved Me 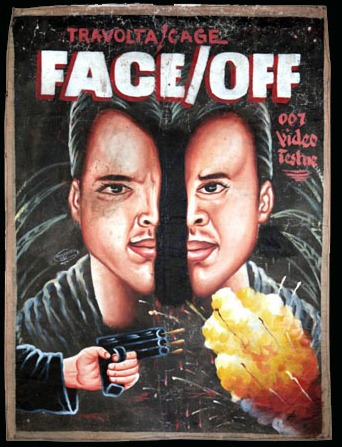 Would you watch these films after seeing these posters? We sure would!

Feeling sinrpied to get some more classic moview in your lives? Check our our huge range of Film T-Shirts today including some of our bestsellers below….

Just when you thought we’d pulled out all the stops, we’ve only gone and released our very own, brand spanking new classic movie quote T-Shirts!

Inspired by some of the biggest retro films and the classic lines that help define them, our latest movie tees are a great way to show off your passion for the iconic flicks in a more subtle way that all other die-hard fans will fully appreciate. Featuring quotes from the likes of Top Gun, Forrest Gump and Grease, our exclusive new T-Shirts will make amazing additions to your retro collection and will be a cool look for the Summer months. Check out our latest range below and get inspired…

Also available for the colder snaps are the same of these exclusive prints on our amazing, soft grey jumpers! Take a peep…

Pick up one of our fab new Tee Shirts today for only £19.99 or our sweaters from £29.99 with next day delivery if you order before 4pm!

Hot diggidy! It’s only the weekend!
So on a desert island in the middle of nowhere under one lonely palm tree let us be your storm beaten stranded survivor as we try and build for you a raft of retro movie magic, forage for cinematic awesomeness and crack coconuts for celluloid wonder.

Junior (1994) Sky Movies Comedy 12:50pm-2:45pm (1 hour 55 minutes)
A fertility expert pioneers a treatment enabling men to become pregnant and carry babies to full term. When the authorities cancel funding for the research, he decides to test it on himself, but gives little thought to how difficult it will be to keep it a secret. The situation is further complicated when he starts to fall for the woman whose child he is carrying. Comedy, with Arnold Schwarzenegger, Danny DeVito, Emma Thompson and Frank Langella

The Karate Kid (1984) Watch 1:30pm-4:00pm (2 hours 30 minutes)
A teenager at a new school befriends a pretty girl, but her ex-boyfriend is jealous and attacks him. During one particularly bad fight, a wise old caretaker intervenes and defeats the youngster’s assailants using his martial art skills. He goes on to mentor the boy and teach him karate so he can face his enemies in a tournament. Drama, with Ralph Macchio, Pat Morita and Elisabeth Shue

Transformers (2007) Channel 4 8:30pm-11:15pm (2 hours 45 minutes)
Teenager Sam Witwicky is treated to his first car by his dad, but it turns out to be an alien scout with a life of its own. Before long, the vehicle embroils Sam in a long-running intergalactic war between two factions of giant shape-changing robots, which have come to Earth to find a mystical cube that grants infinite power to its possessor. Michael Bay’s sci-fi action adventure, inspired by the toy franchise, with Shia LaBeouf, Megan Fox, Josh Duhamel, Jon Voight and John Turturro

Cocktail (1988) E4 9:00pm-11:05pm (2 hours 5 minutes)
An ambitious bartender and his mentor become the talk of New York before their differences drive them apart. Relocating in Jamaica, the barman is torn between the waitress he loves and a wealthy older woman who can make his dreams of running his own establishment come true. Drama, starring Tom Cruise, Bryan Brown, Elisabeth Shue and Lisa Banes

Brewster’s Millions (1985) Channel 4 2:40pm-4:45pm (2 hours 5 minutes)
A baseball player is stunned to learn he has come into a massive inheritance. Unfortunately, there is one condition – he must somehow find a way to spend $30million in just one month, or he will lose the lot. Meanwhile, two scheming lawyers, who stand to get the money if he fails, are determined to sabotage his efforts. Comedy, starring Richard Pryor, John Candy, Lonette McKee and Jerry Orbach

Stargate (1994) Channel 5 4:45pm-6:55pm (2 hours 10 minutes)
An Egyptologist and a soldier head an expedition through a mysterious portal to an alien planet. The world they find resembles ancient Egypt and is under the rule of a tyrant who has convinced the downtrodden inhabitants that he is a god – until the humans incite the enslaved populace to fight back. Sci-fi adventure, starring Kurt Russell, James Spader and Jaye Davidson

A Few Good Men (1992) Watch 9:00pm-11:50pm (2 hours 50 minutes)
Two marines based in Cuba stand accused of murdering a comrade-in-arms. Three Navy lawyers working on their defence unearth evidence that the soldiers may have been acting under orders, which points to a trail of corruption leading all the way to a top-ranking officer. Drama based on Aaron Sorkin’s stage play, starring Tom Cruise, Demi Moore, Kevin Pollack, Jack Nicholson, Kiefer Sutherland and Kevin Bacon

Austin Powers: International Man of Mystery (1997) Channel 5 11:05pm-1:00am (1 hour 55 minutes)
A velvet-clad, sex-crazed secret agent from the 1960s agrees to be put into a state of suspended animation after his arch-enemy escapes justice. Thirty years later he is defrosted to do battle with the power-mad villain again, but the mission proves nearly as daunting for him as getting to grips with 1990s social values. Spoof spy adventure, with Mike Myers, Elizabeth Hurley, Mimi Rogers, Michael York and Robert Wagner

Whatever you get up to this weekend, remember if you can’t handle the truth then get out of the kitchen and enjoy yourselves.